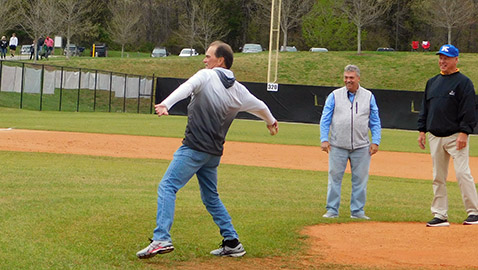 The Central High School-Karns High School baseball rivalry is one of Knoxville’s oldest and it has deep roots. The Bobcats and Beavers have been league rivals for years.

Thus, they have played numerous times over the years and have had some memorable showdowns.

In fact, the two teams split a District 3-4A home-and-home series last week as the 2022 season is now in full swing.

Before the series opener last Monday, the Bobcats and Beavers commemorated a memorable District 4 Tournament game between the two longtime rivals, played nearly five decades ago.

In May 1972, the Bobcats played a classic game that lasted 17 innings. It spread into two days as a rain delay forced the game suspended on Saturday, May 19. Play was halted in the fourth inning before being concluded on a Sunday at Fountain City Ballpark.

The Beavers and Bobcats were locked in a 0-0 tie until Central took a 1-0 lead in the 17th inning. Central would go on to win, 4-0. The following year, the Bobcats would win a state championship.

But the 1972 game was memorable, not only due to its length or the weather delay.

It was your classic pitchers’ duel but what made this one unique was that Central pitcher Mike “Huck” Huskisson hurled a complete game. Karns pitcher Bill Butler pitched 16 1/3 innings before being taken out by then-Karns head coach Allen Morgan.

Both Huskisson and Bell went on to play for Tennessee. They were friends but, prior to leaving UT, the two pitchers discovered that they were distant relatives.

“I gave up a run in the 16th inning and they took me out,” Butler said. “I remember riding on the bus (in 1973) to go watch them in the state tournament.

Huskisson not only picked up the win on the mound, he had a hand in the winning run.

He said that he had trouble sleeping after the game was halted.

“We played four innings the first night and we had a weather delay,” Huskisson recalled. “I had a 3-2 count and they had the bases loaded, so I had to worry about that all night.”

Many former Central players were on hand for the celebration along with Morgan and former Bobcats’ coach Tommy Schumpert.

“We stayed friends until Bill got married and moved to Nashville,” Loy said. “We played together in the summer and played in the Mickey Mantle World Series.”