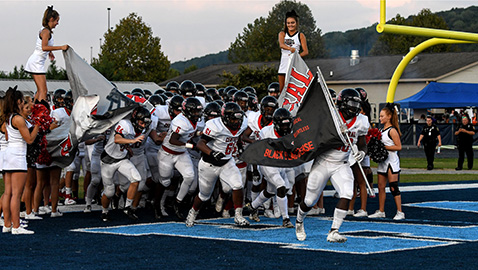 It wasn’t pretty, but it was a win.  On Friday, September 13, the Central Bobcats stayed undefeated with a 16-7 victory over a motivated Hardin Valley team.

“You have the opportunity to play against really good talent,” said Central head coach Bryson Rosser. “Coach Potter is doing a really good job in his first year as head coach (at Hardin Valley).  I know him on and off the field and they are just gonna continue getting better. We knew it would be a huge test for us.  I want our guys to be ready when we get into region play.”

The Bobcats opened the scoring in the first quarter but it wasn’t the offense putting the ball in the end zone.  Central defensive back Isaiah Osborne was in single coverage with a Hardin Valley receiver. A 50/50 ball went his way and Osborne came up with it.  He proceeded to run 25 yards down the sideline for the score.  The game wasn’t even four minutes old, and Central was up 7-0.

“Our defense played great,” said Rosser. “It’s all about our kids believing in the game plan.”

In the second quarter, Hardin Valley (1-3) put together a drive that went all the way to the Bobcats six-yard line.  But the defense held firm and forced a field goal attempt which went wide left.  Still, the Hawks offense was  finally able to break through on the speedy legs up Helton Gunn.  He took the football around the right side of the Hawks offensive line and raced fifty yards down the sideline for a touchdown.  With 2:30 left in the first half, the Hawks trailed 10-7.  It would be a 13-7 game at intermission.

The Bobcats were stymied in the end zone on multiple occasions in this game.  Two scores were wiped off the scoreboard due to penalties.  If Central (4-0) can find ways to correct those errors, another trip to the state championship game isn’t out of the question.  “It’s frustrating as the head coach, as the offensive coordinator, as the play caller, all of the above,” said Rosser.  “Penalties killed us.  I think we had 12 or 13 penalties offensively.  That just cannot happen in any football game.  Very fortunate to come away with the win.”

In the third quarter, some trickery made a big difference for Central.  On fourth and 6 from the Hawks 39, the call was for a fake.  The snap went to Makhi Anderson, who ran 22 yards to the Hawks 17.  A 29-yard field goal by Jarred Swislosky extended the lead to nine points.  Rosser made sure to recognize his kicker after the game.  Were it not for his three field goals, this might have been a different game.

“He is a state championship kicker,” said Rosser. “He was there last year doing all the duties for us.  For him to concrete on extra points and field goals, it shows how big it was for us. Offensively we want to get in the end zone but if you give him a chance to get three points… him making that last one made it a two possession game.  It allowed us to breathe a little bit and let our defense continue to play lights out.”

The Central defense was a force all night, harassing Hardin Valley quarterback Jacob Smith time and time again.  The pressure he was under symbolized what the Hawks had to deal with throughout the night.

Give credit the Hardin Valley.  After allowing a combined 83 points the past two weeks, they allowed only nine offensive points.  On Friday Hardin Valley heads back to region play at Dobyns-Bennett.

As for Central, the beat goes on for one of the best teams in the state.  On Friday they also have a region game, at home against Seymour.