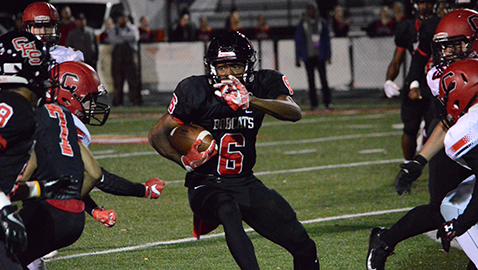 Wide receiver Daunte Holliday and Demetrien Johnson each had two touchdowns to lead the Bobcats in scoring.

On Central’s opening possession, Holliday started the scoring with an 18-yard touchdown run on a sweep around left end for a 7-0 lead.

Bobcats’ running back Jason Merritts ran for a 14-yard touchdown on Central’s next possession. Answering Central’s score, Cocke County’s only score of the game came on a halfback pass. Running back Carson Nichols threw a 40-yard bomb to McKayne Ramsey with 5:12 left in the first quarter to cut the lead to 14-6.

The momentum did not last long. It was Johnson’s turn to get in on the Bobcat scoring fun. His first score was a 21-yard touchdown reception from Bobcats’ quarterback Dakota Fawver. The score put the Bobcats up 20-6 with 4:09 left in the first quarter.

Johnson’s second score, a 61-yard punt return for a touchdown, electrified the home crowd and put the Bobcats up 27-6 with 8:37 left in the second quarter.

Johnson also contributed on defense as he intercepted Cocke County’s Jarren Ensley’s pass and ran it back 30 yards to give the Bobcats a first down at the Cocke County 17-yard line. On second-and-goal from the 1, Devone Moss ran for a touchdown to give Central a 34-6 lead and finished the game with 10 carries for 108 yards and the touchdown.

“The linemen created for me,” Moss said. “The linemen get that push up the line of scrimmage; it’s just your job to take care of the rest.”

Penalties, particularly personal fouls, were an issue for the Bobcats. “The flow of the game was just kind of weird,” Central Head Coach Bryson Rosser said. “A lot of newness in round one. The kids are chippy; the season’s on the line. It’s win or go home. Our kids are playing with some confidence right now. There are some things that, you know, could have been let go, but I completely respect the referees and what they do.”

In the second half, Holliday scored his second touchdown on a 49-yard touchdown catch from Fawver. The catch made it 41-6 Central with 1:57 left in the third quarter and began the Mercy Rule, or continuous running of the clock when one team is up by 35 or more points in the second half.

Xavier Washington tacked on a fourth quarter 60-yard interception return for a touchdown to make the final score 48-6 Central.

“Our defense played great,” Rosser said. “Offensively we moved the ball well. Our kids continued to buy into the process. Obviously still putting wins together in November is a good thing.”

Central hosts Daniel Boone Friday in the second round of the Division 1, Class 5A State playoffs.

“They’ve got a really good tough running back,” Rosser said.  “It will be a tough matchup between two teams but we’re looking forward to it.”