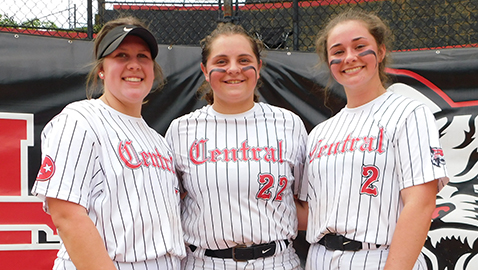 A Sunday afternoon makeup game on May 2 couldn’t have worked out any better.

“The game time today was 2:02,” said Central High softball coach James Swaney after his Lady Bobcats’ 8-1 win over Clinton at Fountain City Ball Park. “I did that for Savana Hurd. Her number is 22 and I wanted to put it out there for playing at two minutes after 2 just to make it special.

“She signed with Union College and we are real proud of her at Central High School.”

Swaney’s team missed 11 playing dates between April 18 and April 27 due to COVID this season. Central managed to make up four of the games, including the rare Sunday contest.

Swaney said Savana had been the most enjoyable player he’s coached in his time at Central.

“I once went and got her from basketball practice and told her I wanted her to play softball. I saw how she acted when she was on the court and off the court and I loved her attitude.

“Savana has come out here and worked hard,” added Coach Swaney. “She has not played a lot of softball in her life, but she has worked hard enough to get her a college scholarship.”

The scholarship wasn’t a sure thing at first, and after a while, Hurd pretty much figured she wasn’t going to get one. But when she did and signed in April, it really made her proud and happy.

“It means a lot to me and my family,” she said. “I thought, I can actually succeed at something, and it brings a whole new meaning to playing a sport that I finally found and truly love.”

Hurd ended up making the game against Clinton even more special as she played a big part in the victory.

With her team trailing the Lady Dragons 1-0 going into the bottom of the fifth inning, Savana drilled a two-out double off the centerfield fence to ignite a two-run rally.

Hurd also picked up a RBI in the sixth when she was hit by a pitch with the bases loaded to make it 4-1. That preceded senior standout Megan Merritt’s grand slam that blew the game wide open.

Defensively, Savana had the honor of ending the game too when she scooped up a ground ball at her second base position and threw to first for the final out.

Hurd was tickled she could contribute to the victory like she did. You could see that in her big smile after the game. You could also hear the modesty in her voice.

“It’s not just on me, it’s all of the team,” she said, “and luckily I was able to get our hitting going and was lucky to get the last out, but without these girls, nothing would have happened today.”

Knowing it could be her last game on that field in a Lady Bobcat uniform wasn’t easy to accept either.

“It’s all very upsetting,” said Savana, who played softball all through high school. “I hate to see it go. But at the end of the game, I’m glad we won and was able to bring it home.”

In addition to Union College, which is located in Barbourville, Ky., Hurd took a visit to Montreat College, N.C.

“Union was where I wanted to go because their athletic training program was really good and Montreat didn’t have one,” she said.

Hurd wants to be an athletic trainer and will major in sports medicine.

“The team at Union also was really nice and they kind of welcomed me in with open arms as well as the coach,” she said.

Coach Swaney believes Merritt, who hit .409 and was Central’s starting pitcher for four years, could also play on the next level and would like to see her “reach out” to some colleges.

Sarah Hinton, a senior first baseman and pitcher for the Lady Bobcats, had a leadoff double down the left field line in the big sixth inning.

Emily Langley, a junior, had a two-run single in the win and sophomore Gwen Hood chipped in a RBI double.