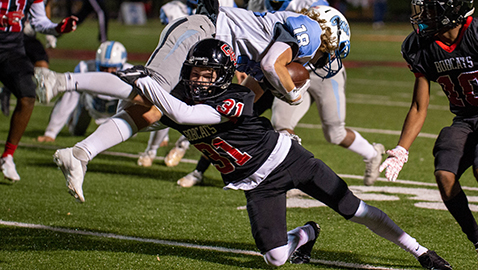 The two-time defending state champ’s chances of winning Region 2-5A were in obvious jeopardy. The win Gibbs had to have to stay in the playoff hunt was looking good.

“We ran the ball really well at times in the first half; we just didn’t finish drives,” said Bobcats’ first-year coach Nick Craney.

But then came the play that would change the momentum and the game. With 6:31 left in the half, the Eagles had a third and five from their 30. Quarterback Colton Qualls’s pass was picked off by Brody Cranford, who returned the ball 32 yards for a touchdown. The 9-7 Gibbs lead held until half.

Central would take that momentum to outscore the Eagles 27-14 in the second half to win 34-23, and nail down the Region 2-5A title.

“He gave us a huge lift on that play,” said Craney of the interception. “We were struggling to finish drives offensively in the first half. That really gave our whole team a lift with that defensive score.”

The loss knocks the Eagles (4-6 overall, 2-4 in the region) out of the playoffs. “It is a tough loss, I’m proud of our guys,” said Gibbs’ coach Brad Turner. “I felt like the first half we were very aggressive and we played really good on defense, controlled the line of scrimmage. I feel like in the second half they got a little momentum.”

They did indeed. Central (8-2, 5-1) jumped to a 21-9 lead with their first two possessions after halftime. First, running back Shannon Mills finished a 58-yard drive with a two-yard scoring run to make it 14-9.

Then after stuffing a fourth-down attempt by Gibbs, the ‘Cats took over on their own 45. On first and 15 from the Eagles’ 35, quarterback Ryan Bolton connected with Jaidin Horton for the score and a 21-9 lead.

Mills and Abraham Dudley Jr. combined for 199 yards on 27 attempts. “They did a great job hitting the holes and hitting some cutback lanes that were there that opened up,” said Craney. “Our offensive line did a great job getting a push.”

Gibbs hardly rolled over. They cut it to 21-16 on a one-yard plunge by Qualls early in the fourth. On that drive, Central had two personal fouls and a pass interference call that kept the drive alive. For the game, the Bobcats were flagged 13 times for 159 yards.

“Penalties are not good,” said Craney. “We gotta get ‘em fixed. We haven’t had many personal fouls, we had a couple today. At this point, we gotta get it fixed and we will.”

Central answered right back to make it 28-16 with 10:05 left in the game. A 34-yard run by Dudley set up a two-yard scoring run by Liam Fortner.

The versatile Fortner not only caught five passes for 99 yards and scored twice, but had 10 tackles and a sack.

But Gibbs again refused to go away, cutting the lead to 28-23 on Qualls’ nine-yard scoring run. A roughing-the-passer and personal foul were called against Central on the drive.

The Bobcats put the game away with 5:20 to go when Fortner finished an 80-yard drive with a two-yard plunge. Mills rushed for 58 of the drive’s yards.

“Credit to them, they’ve got some great players on their side of the ball,” Turner said. “I just feel like we lost the line of scrimmage. Defensively we got a little tired and they lined up and ran right at us.”

Central will host a first-round playoff game Friday night at 7. For Craney, winning the state title the last two years is meaningless heading into the postseason.

“Brand new season, everyone’s 0-0,” he said. “It doesn’t matter what happened in the regular season. It’s a fresh slate. So we’re excited but we know that comes with a challenge. Being back-to-back state champs means nothing in round one of the playoffs. It’s anybody’s game.”