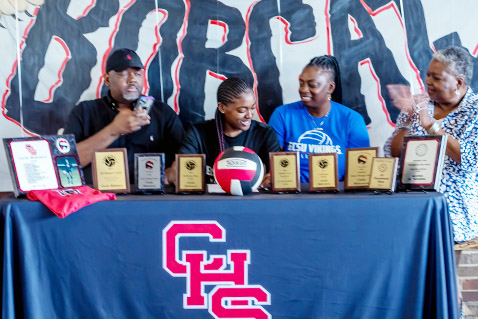 She finalized her college plans just prior to Central’s Class of 2022 graduation earlier this month.

Blakemore exits Fountain City as one of the most decorated players in Lady Bobcats’ volleyball history.

As a junior in 2020, Blakemore led Central to the Region 2-2A Tournament, the Lady Bobcats’ first regional appearance since 1982.

He has been an elite performer at both the district and regional level.

In 2021, she was an all-District 3-3A standout and the league’s Defensive Player of the Year.

During her career at Central, she was a full-rotation player.

“Clarke can attack across the net as an outside hitter, a middle (blocker) and a setter. She is a full-rotation player,” Lady Bobcats’ coach Susan Davidson said. “As a captain and a team leader, Clarke was a leader that led by example on the court and coached the younger players.”

Blakemore was also a stellar performer in the classroom as she was an early graduate and had a weighted GPA of 3.75 with college credit.

She will major in pharmaceutical science and she aspires to become a pharmacist.

She will be approximately eight hours from home.

“I wanted to go to school somewhere outside of Tennessee,” Blakemore said. “I also wanted to an HBCU. I wanted a smaller school, and this one is somewhere in the middle.

“It’s not too big and it’s not too small. It’s just the right size. The coach and the team made me feel welcome.”