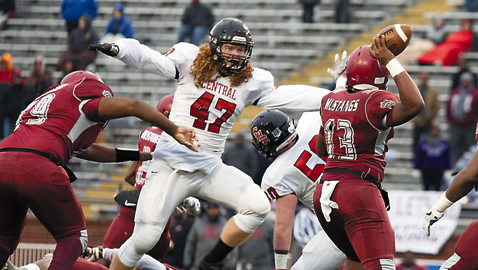 Central’s football team proved to be human after all. They had an off day.

After many magic moments led to an 11-game winning streak and their first berth in the TSSAA state finals in 17 seasons, the Bobcats couldn’t get in the end zone and Memphis East pulled away for a 27-3 win in the Class 4A title game Saturday, Dec. 3, at Tennessee Tech’s Tucker Stadium.

Central became the first East Tennessee team in seven years to return from the BlueCross Bowl with the silver football. Since 2010, Greeneville (twice), Fulton (three times) and Catholic wore out a path hauling back gold from Cookeville.

But the Bobcats far exceeded expectations. Back in August, nobody picked them to have such a season. They earned respect.

“We didn’t take advantage of some opportunities we had early,” said Bryson Rosser, who took Central to the state in just his third season as head coach. “Our defense was playing really well, but we couldn’t get the momentum.

“In the second half, we were still looking for that spark to start our magic so to say. We couldn’t get it going. We didn’t have a lot of consistency on both sides of the ball.

“We just didn’t play our best ball and that happens, especially in high school ball and really on any level.

“It’s still a historic run by this team,” added Rosser. “They’ll go down as one of the best teams in Central High School history.”

Memphis East (13-2) also defeated Central 20-14 in the 1999 finals – the Bobcats’ only other state title appearance in the classification era, which began in 1969. To commemorate the rematch, some fans put up a sign that read, “Let’s Party Like it’s 1999 Again!”

The Bobcats (12-3), however, couldn’t give their fans much to party about.

Central drove to the Mustangs’ 8-yard line on its first possession of the game but came away empty as Elijah Holbert missed a 26-yard field goal.

Timothy Taylor staked East to a 7-0 lead with a 9-yard touchdown run late in the first quarter.

Jadarius Sackie blocked an East punt and Layton Wade recovered the ball at the Mustangs’ 36 with 8:15 to go in the second quarter. Trey Mitchell immediately hit Rondrow Peebles jr. with a 24-yard pass to the 12. A 3-yard run by Sackie made it third-and-seven at the 9. But a delay of game penalty and a 5-yard sack by East defensive leader Zechariah Zolicoffer forced Central to settle for Holbert’s 36-yard field goal.

Tyler Davies forced a fumble and Xavier Washington returned it 23 yards to stop an East threat later in the quarter.  Central also drove to the Mustangs’ 31 as time ran out in the first half.

After intermission, the Bobcats reached the East 38 but Mitchell was intercepted by Andrew Murphy on a fourth-and-six situation.

The Mustangs struck for a pair of touchdowns late in the third quarter, the first on Justin Lynn’s 66-yard pass to Tarique Barnes. Taylor ran in from the 5 on the last play of the third quarter and Ntirengany Karamba’s PAT kick made it 21-3.

Lynn added a 22-yard scoring pass to Jaylon Burrus in the fourth quarter.

Offensively for Central, Sackie rushed 20 times for 105 yards, Mitchell was 14-27-1 for 112 passing yards and Tony Reeves had seven catches for 44 yards.

Defensively, Sackie had five solo stops and four assists, including 2½ tackles for loss. Jahvere Weste made five tackles and one assist, with one TFL and a forced fumble. Washington’s night included five solos, one assist and a quarterback hurry. Davies had four tackles, two assists and two tackles for loss.

Central’s season started getting very exciting when Sackie blocked a punt for a safety with 26 seconds to go for a 43-42 win at Carter.

The following week at Morristown West, the Bobcats erased a 17-point deficit in the second half and stunned the Trojans 25-24 when Mitchell hit Sackie in the end zone with no time left on the clock.

After holding off Fulton 21-19 in the regular season finale, Central shocked previously unbeaten Greeneville 16-14 in a second-round game on the road when Louis McNair caught a 43-yard Hail Mary from Mitchell with 6.8 seconds to go.

The Bobcats eliminated Fulton 20-6 in what was billed the Battle of Broadway Part II.

And then there was the 31-24 semifinal win at Marshall County after Central trailed 21-3.

“I couldn’t be more proud of the players, the coaches and the community and school for all the support they gave us,” said Coach Rosser. “It was still an unbelievable year and gives us a lot of momentum with the younger guys. It also gives them a taste of what it’s like to make it that far.

“My hat goes off to the seniors. They were the blood, sweat and tears of this program. They were with me almost their whole time in high school and they were all in to everything that I’ve tried to instill in the foundation. You saw that all season long. They never stopped playing. They never quit. Even in the state championship game, they played all the way through.

“Those seniors led this campaign. We challenged them to leave their legacy and they definitely did that this year.”