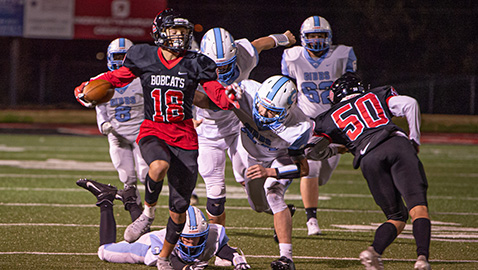 The defending Class 5A state champions lost their last two regular season games and sputtered for most of the first half before getting things rolling in a first-round win over David Crockett High.

And in second-round action Friday night at Joel Helton Field, the Bobcats were in four-quarter mode, scoring on their first possession and never looking back as they avenged their last loss decisively and eliminated Gibbs 49-7.

Now the Bobcats’ sights are set on South-Doyle, which snapped Central’s 21-game win streak in Week 10 of the regular season. If the sky is clear and the field dry for the rematch, look out.

The rain poured and the Bobcats fumbled the football 10 times the last time these two powers collided, contributing to Central’s 38-10 loss to the Cherokees.

Kickoff is set for 7 o’clock in the quarterfinal game Friday night at South-Doyle. The Cherokees (9-3) advanced with a 28-12 win over Daniel Boone. Central is 10-2.

“It’s going to be an exciting game, without a whole lot of rain for sure,” quipped Central Coach Bryson Rosser.

Asked if he had checked the weather forecast, Rosser answered: “I have not. I won’t check the weather until about Thursday, because it’s going to change three times before then.”

Jason Merritts, who totaled 134 yards in rushing and receiving, ran for one touchdown and passed for one. Isaiah Osborne also had four catches for 50 yards and a score.

Makhi Anderson, a senior running back and defensive back, stood out on both sides of the ball, catching a 25-yard TD pass, running with great determination on one 18-yard carry and leading the defense with nine solo stops and one assist.

Linebacker Tyler Bost made his first start since an injury and was a powerful force in the middle, racking up four solo stops, six assists and one TFL.

Central jumped out to a 14-0 lead in the opening 12 minutes and led 35-0 before Gibbs found paydirt late in the third quarter.

Jarred Swislosky was seven for seven on PATs and twice activated the mercy rule running clock.

“A fast start,” Rosser said was the difference this time against Gibbs. “Defensively, the guys came out and stopped them and then we put the ball in the end zone right away. It’s important to have the lead against teams like this and as good as they are. Just really proud of how the guys executed the game plan tonight.”

The Bobcats also had a fast start after intermission, with Fawver completing two passes, including a 40-yarder to Gaston for a touchdown just 36 seconds into the second half.

Sophomore Sylas Williams kept Gibbs from being shut out when he fought to haul in a 34-yard pass from Troy Davis with 2:53 left in the third quarter.

Gaston soon after restarted the running clock with his fourth TD catch. Osborne took a shovel pass from Fawver and scored from five yards out at 6:39 to cap the scoring.

Ethan Humphries ended his Gibbs career with 20 carries and 85 yards inside the teeth of the Bobcat defense. Davis ran for 77 yards and passed for 78 on only five attempts.

Gibbs Coach Brad Turner said “turnovers” were the difference between this game and the Eagles’ regular season win over Central.

“They came out ready to play,” said Turner. “This was not our best game. We struggled offensively and in the secondary. Hats off to Central. They are a motivated team right now.”

Gibbs finished the season 8-4, including a 20-13 win on the road over Region 1 champion Tennessee High in the first round.