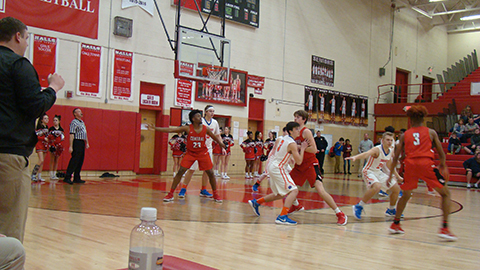 But Central, which finishes the campaign with an 11-19 record, did steal a win in a first-round win when it edged Campbell County 51-49 Tuesday night on the north side of Black Oak Ridge.

The Bobcats clinched the victory over the sixth-seeded Cougars (9-19) when Tevon Summers made a game-winning reverse layup with 3.8 seconds remaining in the contest.

The game-winner culminated a big comeback for Central, the tournament’s seventh seed, which trailed by as many as seven points with 5:26 remaining in the game.

The Cougars opened a 43-37 lead at the juncture when senior guard Evan Jackson was fouled on a long-range jumper and went on to knock down all three subsequent free throws.

But Central, which has battled adversity all season, kept clawing away.

Campbell County, however, appeared to have things all but wrapped up when senior John Porter converted a pair of foul shots to give the Cougars a 49-45 advantage with 1:16 left to play.

But the Bobcats forced CCHS into some late turnovers. They pulled to within 49-47 on a bucket by Devonne Moss at the 1:05 mark. He was fouled in the act of shooting, but he missed the free throw.

From there, the Cougars got a little sloppy with the basketball and Central would knot the contest when Hunter Allen made a steal and drove the length of the floor to score the game-tying basket.

Campbell County had another turnover to set up Summers’ eventual game winner. The Cougars had one last gasp but Porter missed a potential game-winning 3-pointer as time expired.

Central first-year head coach Andy Hill said that he was pleased with the way his team responded to the challenge of facing an elimination game against the Cougars.

“In the postseason, you face everything that plagues you during the season,” Hill said. “For us, the thing we have to do is stay in the moment. If something goes wrong, you can’t worry about it.

“You just have to move on. You can’t do anything about it.  Tonight, our players did that. I was really proud of the way our guys fought tonight. Our players just kept fighting.”

The Bobcats grabbed the upper hand early as the held a modest 11-8 lead at the end of the first quarter. Central extended its advantage to 24-19 by halftime before the Cougars dominated the third quarter.

The Bobcats had three players post double figures in the scoring column. Summers led the way with 18 points (including 10 in the fourth quarter). Moss finished with 12 and had eight before the break. Allen would finish the contest with 11 points.

Red Devils fall in first round: Halls, the tournament’s host and fifth-seeded team dropped a 55-52 decision to last-place Clinton in Tuesday night’s other opening-round tilt.

Trevon Hill led the eighth-seeded Dragons with 13 points. Clinton boasted a balanced offensive attack. Evan Winchester had 12 points. Luke Harrison added 11. Andrew Shoopman had just one point but it was a big one as it provided the final margin for the Dragons.

Senior Jordan Corvette finished his prep career with 32 points for Halls to lead all scorers.