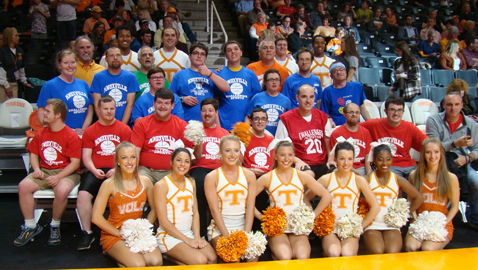 “I think we helped them get cured up and get going,” said Sanders, who was watching the Vols blister Presbyterian in the second half of their 90-50 win last week at Thompson-Boling Arena.

Sanders was sitting between Marty Myers and Randy Branson.  Chris and Marty had played for the Red team and Randy the Blue team as Knoxville Challenger Sports teams divided up and played at halftime of the UT game.

Knoxville Challenger Sports, Inc. is a non-profit organization created to give opportunities to children and young adults with special needs. It began 20 years ago with Little League Challenger baseball at Lakeshore Park and has grown to include basketball, golf, swimming and bowling.

Sanders, who wore No. 22 for the Red team, said he liked “just getting out there and putting on a good show for the crowd.”

His teammate Marty, No. 25, added, “It was fun going out there and playing like the real guys.”

Marty said he didn’t score, but “almost … it bounced right off the rim.”

What Marty enjoyed the most, he said, was “just coming out and having fun. It doesn’t matter if you win or lose. You’re just here to have fun.”

Randy, who wore No. 1 on the Blue team, said “I liked everything really” about the experience.

The two Challenger teams consisted of about eight players each and all played at the same time due to a limited amount of time. That made for a crowded court. Wayne Norton was the referee, but not a single foul or violation was seen called.

No score was kept either, but 6-foot-9-inch Nick Ferris stood out for the Red team and made some baskets inside. Cory used a walker to get up and down the court for the Blue team and fired up at least one shot.

Nic Arning, Chairman of the Board and founder of the Knoxville Challenger Sports program, said the organization accepts youngsters starting at age 5 and “depending on their disability, we’ll keep them up into their 30s.”

This was its first opportunity to play at a UT basketball game. Haydn Tanner, a Christian Academy of Knoxville student who has been assisting the Challenger Sports program as a community service project, set up the basketball game at UT.

“Those were the older kids that we had out there tonight, giving them the first chance to play basketball at UT,” said Arning. “Hopefully, we’ll get to do this again and we’ll go with the younger kids next time.”

The UT fans were pulling for both teams on the floor and gave the Challenger players a standing ovation at the end.

“Everytime we’d take a shot I heard a groan or a cheer,” said Arning. “That’s what we want our kids to hear. They don’t get to do a whole lot in public. When we play the UT baseball and softball teams, there’s not much of a crowd. We had a big crowd tonight and this will live in their memories from now on.

The Challenger team also plays games against some high school teams in the Knoxville area.

Arning said the Challenger program has about 120 to 140 kids from one sport to the next.

“We also have cheerleading because we weren’t getting enough girls to play basketball,” he added.

“We’re real big on safety because we don’t want any of them to get hurt. We’ve gone 20 years without any serious accident. We have a lot of adult supervision.

“We’ve had kids who are blind playing baseball.”

Cost is only $10 to play a sport per participant and “scholarships” also are available if needed, said Arning.

For more information on the Knoxville Challenger Sports program, call Arning at 865-414-3000 or e-mail kchallengersports@comcast.net.