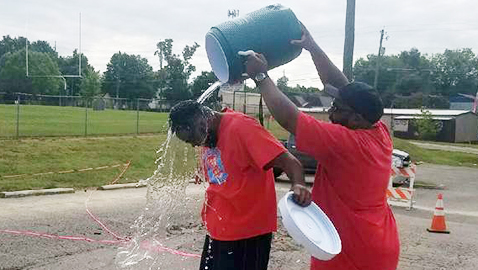 It may be grassroots football, but the intricacies of it are more sophisticated than one might expect.

At least that was the case for Grace Christian’s 11-and-under Pee Wee team this season. The Rams installed a new offense this year and put in a new defensive formation for the post-season tournament in the Knox Metro Youth Football League.

The result was a championship!

“We went from a run heavy single wing to a passing spread,” said Grace head coach Mike Martinez via e-mail. “It took the coaches and the boys the entire season to fully grasp the schemes.”

At one point, the Rams had a 5-3 record, but all three losses had been close.

“After our third loss, we changed some blocking responsibilities to boost our inside run plays,” pointed out Martinez. “We also added a pulling lineman to our sweeps. Those two adjustments alone made a huge impact.”

There were meaningful moves on the defensive side of the ball, too.

“We switched from a 5-3 to 6-2 for the playoffs since we knew that Carter and Halls were much larger than us up front,” stated Martinez. “This forced a lot of the runs to bounce outside, which allowed our linebackers to make plays.”

Grace had “three keys to victory” as it went into the title game. “Establish the inside run,” listed Martinez. “Don’t allow any big plays on defense and get one onside kick. We were able to achieve all of those and actually recovered two onside kicks.”

The Grace coach praised his opponent.

“It was an honor to play Halls,” he said. “Don Starnes’ team is one of the best well-coached teams in the area. They were prepared and played a very good game.”

This was a special championship for the Rams.

“I couldn’t be any more proud of our team and coaching staff,” summed up Coach Martinez. “We were the first team in Grace youth sports history to win a championship in Knoxville’s highest level, the AFC division.

“Being a small program, often times it is difficult to compete with the larger ones. As a matter of fact, this team lost every game in the 7U AFC division five years ago.

“We were committed to developing players for the long haul and regardless of the outcome of the championship game against Halls we were able to achieve that.”

At season’s end, Forrest Harris was the head coach of the Falcons’ AFC Pee Wee squad that rolled past Powell 41-0 in the finals at John Tarleton Park.

The Falcons also had a No. 2 seed NFC team in the 10U age group and they ended up taking top honors too with a 24-14 win over No. 5 seed South-Doyle. S-D had ousted No. 1 seed Concord Christian 24-16 in the semifinals.

The Falcons’ three other titles came from their 6U Flag team in a 20-18 NFC win over South-Doyle, their 7U Jr. Hopper squad that shut out First Baptist Academy 26-0 in the AFC division and their 8U Grasshopper AFC team which blanked East Knoxville Athletic Association  14-0.

The key to the Falcons’ success year in and year out?

“I think we have good coaches,” said Larry Cox, the program’s longtime commissioner. “They go and play out of town before the season. Sometimes they get waxed as some teams they play against come from much bigger programs which have a lot more players to choose from.

“They try to play real good competition and we think that helps. But before you go, you have to have some good athletes to go with.

“The coaches work them hard.”

In other title games, the Roadrunners beat the Falcons 19-7 in the 6U Flag AFC finale, Halls downed No. 1 seed Gibbs 20-13in the 7U Jr. Hopper NFC championship game and No. 3 seed Grace Christian defeated No. 4 seed Carter 14-8 in the 10U Minor Pee Wee NFC finals. Carter had knocked off No. 1 seed Catholic 8-0 and Grace had eliminated No. 2 seed West 16-6.

The Falcons also made some noise after the KMYFL tournament. Their 10U team won two games in the Battle of Rocky Top before falling to a Missouri team 8-6 in the finals.

The Falcons’ 12U team, coached by Tony Kyle, lost to Rutherford County from the Murfreesboro area 32-8 after winning its first two games. Antonio Hamilton’s 8U team went 1-2 and Shane Cox’s 7U team 0-2. All four Falcon teams competed in the tourney’s top division.

Playing in the East Tennessee Championships the week before, these Falcons teams went 15-0 and swept all four divisions.

“Our 10U team was super, but all four teams were good,” said Commissioner Cox.