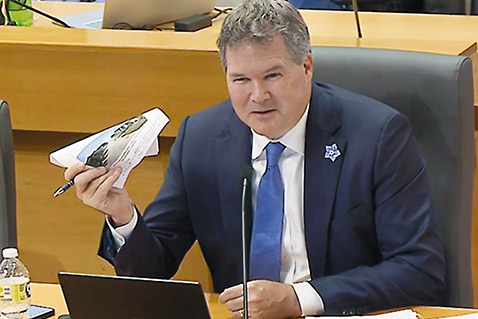 Currently, the Knox County Board of Appeals hears appeals of zoning decisions made by Knoxville-Knox County Planning and, occasionally, appeals of subdivision development plans.  Under a proposed ordinance change entitled “Administration, Enforcement and Interpretation,” the development plans would no longer be heard by the BZA and, if a citizen appeal is made, it would have to go directly to court.

The second and final reading is on the Knox County Commission’s agenda for today in an ordinance change sponsored by Mayor Glenn Jacobs and Commissioner Randy Smith. Opposition to the change has been led by the Knox County Planning Alliance which continued to speak against it in the commission’s work session last week.

Speaking in opposition were Bob Thompson, Lisa Starbuck and Kevin Murphy. They contend the changes are not needed and cited the few development plan appeals the BZA has considered with Starbuck stating that they have been heard, on average, about once a  year, and added, “This is not a growing trend.”

All three said the change will limit the public’s ability to appeal.

Murphy’s presentation included a photo of an existing subdivision with no sidewalks, streetlights or trees but that photo was called out by Commissioner Larsen Jay. Jay said the subdivision in the photo was of a rental development and said it had nothing to do with the issue.

The commission will vote on giving developers an option to opt out of a BZA appeal and require opponents of subdivision development plans to take the matter to court. Opponents claim a court case would be unaffordable to most citizens and the change would favor developers.

Outgoing Commissioner Randy Smith moved to send the matter on to today’s meeting with a second by Kyle Ward. Commissioners John Schoonmaker and Courtney Durrett voted “No.”  Commissioner Charles Busler was absent from the meeting and the matter passed in work session, 8-2.

In other action the commission will apparently vote, on second reading, on a request from Engineering and Public Works to close a portion of Old Tazewell Pike in the area of the First Comforter Church. Jim Snowden, engineering director, said a Tennessee Department of Transportation traffic study should be completed by today’s meeting.

The commission also voted to move $7.6 million from 2022 to the 2023 fiscal year and approved an amendment to the Summit Hill Redevelopment involving the tax increment financing there.

An agreement with the city and the Sports Authority for the proposed multi-use stadium project in downtown Knoxville was approved as was an amendment to the Magnolia Avenue Warehouse District Redevelopment and Urban Renewal Plans consenting to a delegation of power to the Industrial Development Board. The board and the city of Knoxville were authorized to negotiate and accept payments in lieu of tax to properties around that area.

Developer Randy Boyd spoke briefly saying the stadium “will be the best stadium in minor league baseball” in the nation.

The commission also voted on an agreement with KUB related to fund the utility district’s “Student Internet Access Program.” The idea is to provide internet access to students of low-income qualified families.

The county’s new real estate tax rate will be on tonight’s agenda as well. Finance Director Chris Caldwell told the commission the tax rate will drop from $2.12 per $100 of assessed value to $1.5540. Assessed value of homes has increased since the last appraisals.