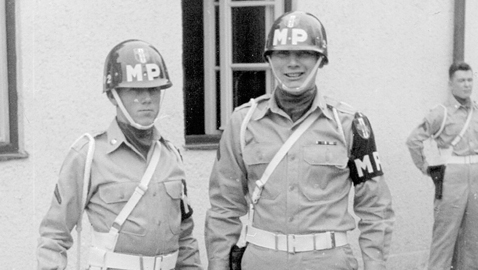 “I was totally surprised when I got my orders and found out I was going to Salzburg, Austria. I had to look on a map to see where it was located!” he said. “That was the beginning of a beautiful journey of a lifetime,” he added. Charlie Lovell was drafted into the Army on November 13, 1953, and completed basic training at Fort Jackson, South Carolina, and weeks of military police and leadership training at Camp Gorden in Augusta, Georgia. “Korea was just winding down, and we all felt like that was where we were going,” he said. Instead, his unit was sent to Salzburg. “It was an absolutely beautiful city located on the Salzach River, and I didn’t realize until years later the importance of our being there,” Lovell added.

It is like a lesson in history to hear Charlie recount the events. Lovell was in the 202nd Military Police Company, a part of 7601 Headquarters Company, that was the authoritative force of the occupation forces. Austria was taken over by the Germans in 1938. After the war, in 1945, the U.S. Forces moved in and took control; however, they were not there to control but to help in the revitalization of the country.

After a 13-day trip across the Atlantic to Livorno, Italy, Charlie arrived in Salzburg. His company commander learned that Charlie was a professional baseball player and asked if he would like to play basketball and softball. Charlie welcomed the opportunity to play ball. The commander offered Charlie a job in his office; but first, Charlie had to learn to type. After four weeks in an Austrian typing school, the former baseball player learned to type—40 words per minute! That certainly caught my attention. As a former typing teacher early in my career, I spent several semesters learning to teach business education courses.

One of the work details Charlie volunteered for was to go to the little town of Oberndorf, about 50 miles to the north on the German border, to investigate an accident where a farmer claimed a GI had hit his fence and damaged part of it. Charlie and another member in his unit investigated and gave the farmer 50 shillings to repair the fence. The next part of Charlie’s story is fascinating.

As Charlie and his partner were going through town, they saw a little church and noticed several people going in and coming out. They decided to go over and see what was going on. “To our amazement, it was the church where Joseph Mohr and Franz Gruber wrote Silent Night, probably the greatest Christmas carol of all time!” Charlie said. What a special moment for Charlie to be serving his country in a faraway land and find himself in the house of worship where history was made! “It is one of the great highlights of my life,” Charlie said. “Silent Night is such a beautiful and quiet song,” he added. The veteran recalls candlelight services at church where the beloved carol is often sung soft and low. And Charlie had been in the very place where it began! “ . . . Christ the Saviour is born.” Merry Christmas!

Piddle Diddle update: Our new children’s book, “Piddle Diddle, the Widdle Penguin, Goes to Hawaii,” as well as our first book, “Piddle Diddle’s Lost Hat” (favorite Santa hat), is a perfect gift this Christmas for little ones or for anyone who likes penguins! Books are available at Barnes & Noble on Kingston Pike, bn.com, amazon.com, or www.majorbooksofjoy.com for autographed copies.