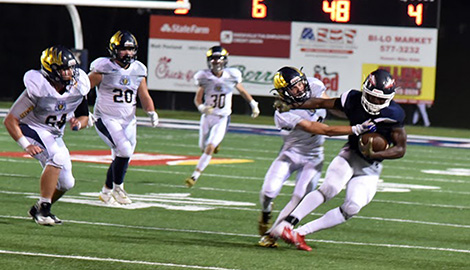 It was a fun time at Billy K. Nicely Stadium in South Knoxville Friday night.

South-Doyle senior wide receiver Ton’Quez Ball scored three touchdowns and set up another to lead the Cherokees past border rival Seymour 58-21 in a Region 2-5A contest.

Young Cherokee players got in on the fun, too. TaShawn Patrick, a 5-11, 205-pound sophomore lineman, was grinning on the sideline after getting his hands on the football and returning a short kickoff in the third quarter. He may have gotten a glimpse of the end zone before being stopped.

Freshman teammate Curtis Young, younger brother of Elijah and Ezra Young, capped the scoring with a 5-yard run late in the game and celebrated with body bumps and plenty of high fives with his teammates, who were as happy as him.

Even the 1968 Doyle High football team was honored at halftime on its 50th year reunion. The Pioneers, coached by the late Bobby Gordon, were 10-0 and Knox County champions in the second season of the new South Knoxville high school back then.

Longtime PA announcer Robby Howard told the fans that special team was rated No. 9 in the state at the end of the season and its defense allowed an average of only nine points per game.

South-Doyle’s present team also is listed high in the Class 5A state ratings. It will go into its game at Halls this week 6-1 overall and 3-0 in region play.

Ball skipped into paydirt with a 17-yard reception from junior quarterback Mason Brang for the game’s first of many touchdowns with 8:14 showing in the opening quarter. Senior Luke Lynn kicked the PAT.

“He (Ball) is a big-time player,” said Duncan. “If we get the ball anywhere near him, he’s going to make big plays for us with his hands and his feet. He’s a special young man.”

Nate Adebayo found a big hole on the right side of the line on an 11-yard run to make it 14-0.

Ball caught an 18-yard TD pass just in front of the left corner pylon as the lead grew to 21-0.

Seymour (2-4, 0-3) finally countered when Jeremiah Cataline got behind the secondary and hauled in a long pass in the middle of the field from Grayson Campbell and raced to paydirt. The PAT kick was blocked, but the 81-yard play cut the Eagles’ deficit to 21-6 at 9:29 in the second quarter.

Ball quickly struck again for S-D. He grabbed a short pass from Brang, made a move to escape defenders and scored on a 35-yard play.

Brang connected with Ezra Young from five yards out to make it 35-6 and Lynn’s 44-yard field goal gave the Cherokees a 38-6 halftime cushion.

Seymour started the second half with an 80-yard scoring drive. Campbell had a 36-yard run in the march and threw a 34-yard pass to JD Kandel for the TD. Campbell’s two-point run closed the gap to 38-14.

A delay of game penalty on the Eagles and Patrick’s return of a short kickoff gave South-Doyle good field position at the Seymour 29. Ball caught a 23-yard pass to set up Santana Curtis’ 5-yard TD run.

Cameron Dyer came down with a 58-yard catch to put Seymour in the red zone. After Campbell left the game with an ankle injury, Gabe Kitts scored from the 3 out of the Wildcat formation. Will Zamboni’s PAT kick made it 45-21.

Brang scored on a 10-yard keeper but a low snap prevented the PAT try.

Sophomore Ewan Johnson booted the Cherokees’ final point of the game through the uprights following Curtis Young’s TD with 3:49 left.

“I’m proud of our guys in the second half because they didn’t come out and just completely lay down,” said Scott Galyon, first-year Seymour head coach. “They fought and I felt like they finished the second half. We’ve just got to start quicker.”

Seymour will travel to Gibbs Friday night for a region contest.

Coach Duncan said after the game that South-Doyle standout running back Elijah Young had already been cleared by doctors to play in the next game at Halls.