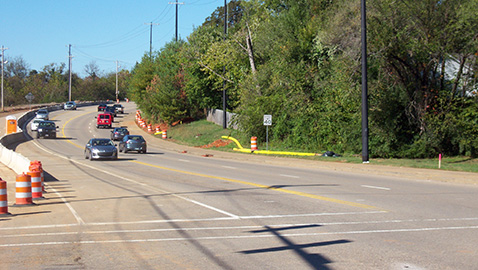 TDOT did a traffic study and decided to also halt the green arrow for left turns which meant that a single car needing to turn left on to Turkey Creek Road could create a traffic jam past Northshore Drive. Frustrated drivers used nextdoor.com to vent their feelings and try to convince the Town of Farragut and TDOT to provide some relief. When that relief did not come suggestions came forth that drivers going south could stop while they had a green light to left drivers needing to turn left on Turkey Creek to pass.

The only problem is that created rear end accidents for drivers behind the driver who suddenly stopped on a green light to let others drivers turn left. The new idea was not a safe idea. This is where a new citizens group in Farragut became involved. In mid-September Farragut Citizens for Responsible Growth and Development went live on Facebook. In six short weeks their membership has grown to over 650 members. You can learn more about this new group at www.facebook.com/groups/FCRGD/

FCRGD members began emailing the Town of Farragut and TDOT to re-open both turn lanes on Concord Road at Turkey Creek in early October citing traffic safety and the coming winter weather. Farragut Mayor Ron Williams replied to them, “I do hope that some understand that there a couple of other ways to go that may take a few minutes longer but are available to all.” The Town Engineer of Farragut Darryl Smith replied, “The Concord Road project is managed by TDOT’s Construction office, and they’re well aware of the issues that come up with traffic control. They’re highly trained professionals, and perform a difficult job under trying circumstances.” TDOT spokesman Mark Nagi replied, “As with most construction projects, there have been a number of unforeseen issues arise impacting the project in one way or another.  However, to this point in the contract the only noted delay to the critical path stemmed from a utility relocation. The revised completion date of the project is Fall 2021.” The original completion date was October 31, 2020 so this has added an additional year to the road project.

FCRGD members then expanded their email campaign to include all the Farragut Aldermen and Tennessee State Representative Jason Zachary and Tennessee State Senator Richard Briggs. On October 30 Michael Wilson of FCRGD posted on their Facebook page a request to members to call and email the elected representatives of Farragut and TDOT engineers. Many members responded and then on October 31st Representative Jason Zachary announced he was in contact with Steve Borden the Director/Assistant Chief Engineer of TDOT Region 1 and a solution to re-open the right turn lane would occur in five to seven days. The next day was Friday November 1st and in less than two hours TDOT had re-opened the right turn lane. Representative Jason Zachary told the people of West Knoxville in a Twitter post that in two weeks the left hand turn lane would be re-opened.

Michael Wilson of FCRGD thanked both Representative Jason Zachary and Steve Borden of TDOT in a Facebook post later that day for their work to make Concord Road safer and relieve the traffic congestion before winter comes.