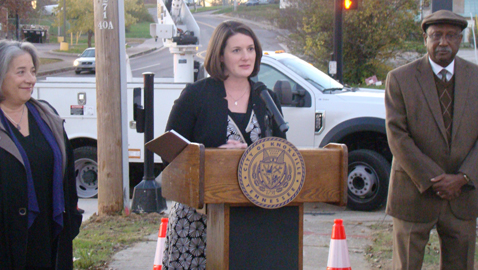 The City of Knoxville is changing its streetlights. It became official recently when Mayor Madeline Rogero hosted a ceremony where the first LED light was lit.

Rogero and city councilman and former mayor Daniel Brown were on hand when Angel Pena of Siemens turned on the first new light in East Knoxville on the corner of Martin Luther King Jr. Ave. and Olive Street.

That ceremony began the retrofitting project to replace the old inefficient lights.

“I’m very pleased that Knoxville is the first of Tennessee’s four major cities to begin retrofitting. Knoxville is taking a leadership role in this,” Rogero said. “Improving visibility at night and exceeding our sustainability is a win-win.

“Also, we’re especially pleased that Siemens has hired local subcontractors to do the bulk of the work.”

The ceremony on Martin Luther King Jr. Ave. was the first of nearly 100 demonstration LED’s. Those will be installed at 17 locations throughout Knoxville.

These pilot demonstrations will aid both Siemens and the City of Knoxville to determine the best fixtures and bulbs for different types of streets and locations.

The 16 other pilot locations will be at Union Ave. near Market Square; James White Parkway near the Hall of Fame on-ramp; Central St. and Broadway; Gill Ave. between Gratz and Third; the Interstate 40 and Interstate 275 interchange; Magnolia Ave, between Mary and Beaman streets; Chilhowee Drive at Asheville Hwy,; Chapman Hwy. at Woodlawn Pike; Sequoyah Hills at Kenesaw/Keowee streets; Lyons View Pike at Northshore Drive; Middlebrook Pike and Amherst Drive; Ball Camp Pike at Bradshaw Road; Texas Ave. between Stonewall and Sherman streets; Cedar Lane between Parkdale and Lyndell roads; Broadway between Woodrow Drive and Highland Ave. and Winston Drive between Kingston Pike and the I-40 overpass.

By retrofitting the city’s nearly 30,000 streetlights to the LED’s, the city will save money, reduce energy use and take a major step toward exceeding its goal of reducing municipal greenhouse gas emissions by 20 percent over the next three years.

The new technology will save taxpayers nearly $2 million per year.

“This will make things safer and it will save you some money on your taxes,” Brown said.

All retrofitted lights will be installed by June 30, 2019 and Erin Gill, Director of the City’s Office of Sustainability, said that Knoxville will reap the benefits of new lighting technology.

“This project creates multiple benefits for Knoxville,” Gill said. “Not only will it cut in half the energy use of one of the city’s largest electricity users, it will save money and improve the overall design of our lighting system.

“Instead of illuminating the sky and trees with an orange glow, we can focus a crisp, clear light on streets and sidewalks to make it easier to see people and objects in the roadway.”