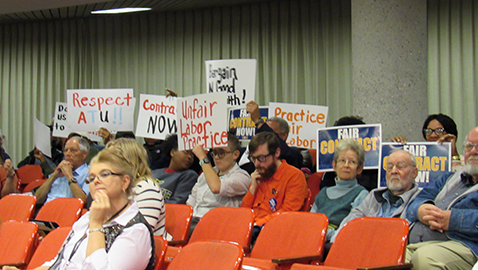 Drainage and homelessness were two issues that occupied a good portion of the Tuesday, Oct. 23 meeting of the Knoxville City Council.

An agreement was reached in the appeal by Ronnie Collins, president of the Alice Bell/Spring Hill Neighborhood Association against the Metropolitan Planning Commission’s approval of expansion plans for The Legends at Washington Pike. The matter had been postponed so residents could meet with the developer and try to work out an agreement. Coming into the meeting, agreement had been reached in seven areas. There was still disagreement about drainage.

The residents were asking for enhanced stormwater controls, claiming there was already significant flooding in the area and that the proposed development would only increase the problem. Arthur Seymour, Jr., attorney for the developer, stated that the city’s stormwater ordinance was very strict and comprehensive and that the developer had complied with it. Residents were requesting a detention area. Robert Campbell, engineer for the project, stated that a detention area, which simply holds water would not be sufficient. He said what was needed was a retention area that would release accumulated water over a short period of time. After considerable discussion, it was agreed that the plans would be designed to allow for a 20 percent reduction of the peak flow allowed by the city ordinance.

As another step in the city’s program to deal with homelessness, the council approved a $170,000 contract with Vinson Guard Service to provide security for the homeless gathering area under the overpass on Broadway next to the Salvation Army. While stressing that the action that evening dealt strictly with guard services Mayor Madeline Rogero elaborated on the city’s program for the homeless. The mayor said the idea was to fence and pave the area and put in water fountains, toilets, benches and tables. The guard service was to open the area in the morning, keep the homeless safe during the day and close it at night. At that time the homeless were expected to go to KARM, the Salvation Army or other shelters to sleep. She said the city has allocated funds for social workers to help the homeless get the government services that are available for them and to coordinate with KARM and other outreach groups. “I think we are doing the right thing at this point,” she said.

David Hays stated that the city was trying to push through the program without input from the homeless and that community organizations had very little input. He urged support for the homeless bill of rights. “Make sure these folks get what they need,” Hays said. His remarks drew applause.

Turning to other action, the city council authorized transfer of $9,250 from “Save our Sons” to Project Grad and transfer of $20,000 from that same source to Socially Equal Energy Efficient Development. (SEEED). The council also approved expenditure of $17,040 in Neighborhood Small grants to support community-building activities planned by six neighborhood organizations.

The developers’ agreement dealing with the old Supreme Court building at 719 Locust Ave. was amended to revise deadlines to allow the developer adequate time for the project. Council also took action that would allow construction to move forward on the project.

The council confirmed the reappointment of Dasha Lundy to the Historic Zoning Commission.

During the public forum several people drew applause as they spoke in favor of the Knoxville Area Transit (KAT) union in its contract negotiations with management. The mayor stressed that by law the city cannot enter union negotiations. She said that action is taken by a private corporation made up of executives of KAT.