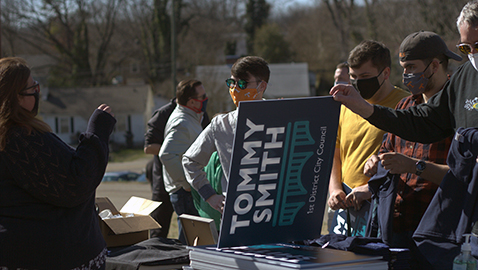 There is a city council election this year and five of the nine members are up for re-election and each incumbent has picked up a campaign petition. March 22 was the first day to pick up a petition and May 20 is the petition deadline.

At this point, it appears all five incumbents will have competition. The people who have also picked up petitions appear to be a mixed group of those who oppose the city’s regulations and enforcement of the pandemic mandates, candidates from the City Council Movement, and a variety of community activists.

Incumbent Tommy Smith, named by the sitting council to replace Stephanie Welch who chose to take a position in Mayor Indya Kincannon’s administration, is up for election in District 1 and would face Elizabeth Murphy of 400 Taliwa Drive in the District 1 race.

Andrew Roberto, the District 2 incumbent, could face an opponent in Edward Cook or Jeremy Cook, both petitions naming 7114 W. Arbor Trace Drive, Apartment 810, as the address. There may be confusion as to whether Edward and Jeremy are the same person.

Councilwoman Seema Singh of District 3 thus far has no opponent.

Incumbent Lauren Rider of District 4 could face both Dan Davis of 6141 Weems Road or Jim Klonaris of 712 Luttrell Street.

Given the petition deadline and the May 27 withdrawal deadline, it is possible more candidates will enter the non-partisan city race.

Petitions may be picked up at the Old Court House at 300 Main Street, Suite 229, or at the Election Commission’s West Office at 109 Lovell Heights Road. You can follow the upcoming city election and get information by calling (865)215-2480 or online at www.knoxcounty.org/election.