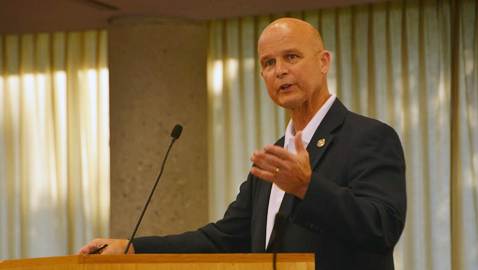 Beginning in July the Knoxville City Council will begin meeting at 6 p.m. rather than the previous 7 p.m. meeting time. The council passed the time change unanimously Tuesday evening and, in doing so, also moved the Beer Board meeting from 6 p.m. until 5 p.m.

The idea is to gain more public attendance.

The brief regular meeting, chaired by former Vice Mayor Nick Pavlis, lasted only about 30 minutes. Mayor Madeline Rogero was away on a trip to China and Vice Mayor Duane Grieve was absent due to the birth of his first granddaughter.

City Recorder Will Johnson opened the meeting and called for the council to select a temporary chairperson and Pavlis was chosen without further discussion.

Three people, Lauren Rider, Mabrey R. Duff and Sharon Davis, were named to the Public Property Naming Committee and the council voted to change the name of Milligan Street, between East Magnolia and Martin Luther King, Jr., to honor Beal Bourne. Bourne addressed the meeting briefly, saying he was honored to be honored with the naming “while I’m alive.”

The council voted to approve the sale of two used police cars to Blaine, Tennessee and to hire Hickory Construction Inc. for a Fort Dickerson Gateway Park Project, an improvement partially funded by the Aslan Foundation, for $806,000. Pavlis said the improvement is “a showcase.”

The Police Advisory and Review Committee’s chairman, Steve Fisher, gave that group’s annual report and announcedt Clarence L. Vaughn, III, as the new Executive Director and Jerry Croome as a new member. Fisher reported a decrease in the number of complaints reviewed by the committee last year. The next meeting of PARC is July 28th at the Beck Cultural Center at 6 p.m. and he invited the public to attend.

Asked about public attendance at these meetings, Fisher said it was not consistent. He said that’s one of the reasons the committee moves its meetings around the community, to get larger attendance.  He reported the committee reviewed eight harassment complaints, 13 cases of rudeness, five wrongful arrest complaints, and also explained that many of the cases involved reviewing police recordings of the incidents.

Councilman Daniel Brown announced that a KAT meeting on June 23rd will hear from the public on more trolley route changes.

The mayor’s Business Breakfast on Tuesday, July 14th at the Civic Coliseum hopes to draw companies to learn how to apply for city contracts. Councilman Nick Della Volpe asked about “some way to advertise” the breakfast on radio and in newspapers to attract minority applicants. Pavlis asked if the city utilizes the state’s list of minority businesses and was told it does.

Brown said attracting minority contractors is “an important issue” and currently there is low participation. The business event starts at 7:30 with a breakfast and runs until 11:30 that morning.

The council also voted just over $700,000 to help fund the Young-Williams Animal Center with a like amount pledged by Knox County. They also voted to authorize the mayor to apply for a grant from the U.S. Department of Justice to purchase bullet-resistant vests for city law enforcers with a 50% match from the city.

Special Events Production, Inc., was hired to provide sound and video equipment for the city’s July 4th celebration for $27,500 and the Capital Budget and Operating Budget were approved on First Reading, allowing leftover funds to be transferred within the new budget.

Riley Drive in Pond Gap may become ”Charles Newman Drive” as passed on First Reading and a zoning change requested by Samuel J. Furrow for a car lot on Parkside and Cogdill Road was postponed for two weeks. Councilwoman Brenda Palmer was the only “No” vote.

A property on the north side of Howard Baker Jr. Avenue and east of Hall of Fame Drive was rezoned from Office and Residential to O-2 (Civic and Institutional).