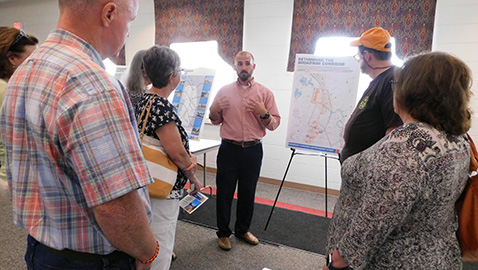 North Knoxville residents were invited to voice their opinions on potential alterations to the Broadway Corridor at an open house at St. James Episcopal Church Wednesday night.

The affected areas run along North Broadway from Glenwood Ave. to McCroskey Ave.

The city will soon begin a study on how to upgrade Broadway and parts of downtown and North Knoxville more pedestrian friendly and better accessible for bicyclists.

The public was invited to discuss ideas with representatives from the City of Knoxville.

Those who attended were encouraged to take part in interactive and written surveys.

Additional discussions were held on a study to be completed in February, 2020 to look at potential alternative design options for the intersection of North Broadway and Hall of Fame Drive up to Cecil Ave.

“The existing intersection works for people who are coming from the north on Broadway, but those who are approaching from the south have no options to get to Hall of Fame or get off and proceed southbound on Broadway,” said City of Knoxville Alternative Transportation Engineer. “It is also extremely uncomfortable to travel by foot or bicycle.

“The study will determine alternative designs for the Hall of Fame intersection for all modes of transportation to travel in a more safe and efficient manner. People have different goals and we have to get public input. We are just beginning the study and from this, we will come up with three or four concepts and then, we will narrow it down to one.

Nathan Kelly, who resides in the area and owns additional property there was pleased to see that the city was accepting community input.

Last summer, Kelly spent time in Spain and he was in a town the size of Knoxville with similar conditions.

“”I loved how it worked in Spain,” he said. “I lived there last summer and it was in a town about the size of Knoxville.

City Engineering Director said that these changes will benefit everyone in Knoxville despite some opposition from some residents.

“And we have to think about those people too.”