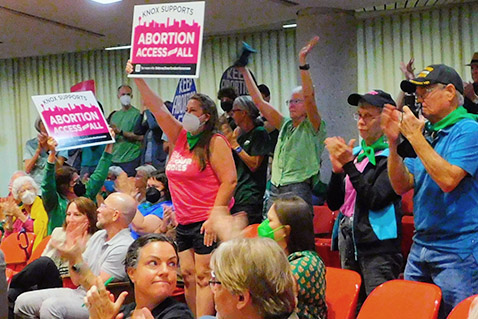 City to pass letter to state for abortion rights

It’s state law now that anyone, including women and their doctors, can be prosecuted for abortions for any reason. That law, which went into effect last month following the U. S. Supreme Court ruling, doesn’t set well in the city of Knoxville.

Tuesday evening’s meeting of the Knoxville City Council was packed with supporters of easing the abortion prohibition. A resolution that affirmed “that city residents should have the right to access fundamental obstetric and gynecological health care services” was supported by numerous local citizens and the majority of city council members.

Under the new law, “I would be a criminal,” Dr. Vickie Knight, an OB-GYN physician, told the meeting. She added that she is worried “young women are considering permanent contraception.”

Wendy Bach, a UT Law Professor, asked the city to limit the police department’s authority to prosecute cases and to fund organizations opposed to the state law. Two local ministers and several other citizens asked that the council pass the resolution.

Many of the council members addressed the resolution.

Lauren Rider said the issue is a “political football” and the state’s new prohibition of all abortions will require the legislature “to go back and fix it” to allow some abortions.

Lynne Fugate said while she disagrees with some of the lines in the resolution, she supports the issue and said, “It’s a bold step for me.”

Fellow Republican Janet Testerman said the matter was “a heavy issue” and added there should be some exceptions but sending the letter to the state legislature could mean the city could “lose some credibility.”

Seema Singh said some people are scared and angry and added, “What we do tonight is important.”

Gwen McKenzie said, “Politics has no place in health care.” Amelia Parker said she was “proud of the city today.”

Tommy Smith supported the resolution but warned of possible retaliation from the state government.

“I trust women to make their own decisions,” Mayor Indya Kincannon told the meeting.

The resolution passed 8-0-1 with Testerman abstaining from the vote.