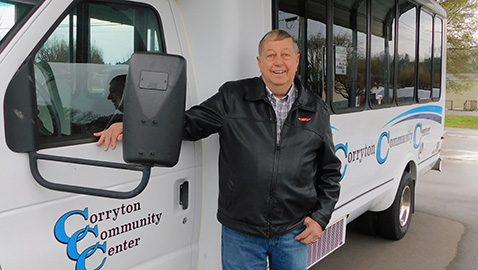 What does the Corryton Senior Center have that no other senior center has? What makes visits to places like Cherokee, Townsend, and the Bush’s Beans Museum possible?

The answer is a 25-passenger bus driven by Larry Clapp.

Clapp not only drives the bus but also organizes trips for seniors who want to get out and travel with others to various places. While other senior centers can rent or hire buses they are limited to visiting places within Knox County. With its own bus the Corryton Community Club and the Senior Center there are not bound on where they can go.

For as little as $6 or as much as $10, depending on the length of the round trip, seniors can travel in comfort and all the money goes to the fuel and upkeep of the bus, a 2006 Ford V-10. Clapp says the vehicle is kept well maintained and replaced an earlier diesel bus.

Clapp said when the center traded for the current bus, he and fellow Corryton resident, Joe Longmire, installed the seatbelts themselves from an assortment the dealer provided.

Trips are planned and approved by Jill Green, Corryton Senior Director, and members of the various community clubs that meet at the center.

“I’ve taken the Sun Up Garden Club to the Glenmore Mansion in Jefferson City; the House Mountain Quilters to several quilting shops, sometimes 5 or 6 shops a day; and the Community Club to Cherokee, North Carolina,” Clapp said.

The next trip leaves March 16 at 9 a.m. for the Bush’s Beans Museum in Chestnut Hill near Newport. The cost is only $10 per person and seniors are being asked to bring some extra money if they plan to eat at the cafe there.

Clapp and his wife, Gay Clapp, are active in the senior center. The Focus recently found Gay updating a display case there with seasonal items. Larry Clapp describes his wife as a “crafty person.” Several men were exercising and talking in the physical fitness room while other seniors were deep into a game of dominos in the assembly room when The Focus was visiting. That Monday the center was having a brown bag lunch and, that afternoon, had scrabble and board games.

Clapp said he’s been driving the bus for about six years and describes himself as a caretaker and driver. Asked what the most memorable trip was, he said, “Brushy Mountain Prison, where we had a former guard as our guide.”

“All I ask is the passengers buy me a ticket and buy me lunch,” he said about escorting a group on a trip.

He said the funniest trip was when a lady on board announced she had a bladder problem and he had to turn the bus around and go back about five blocks.

Larry and Gay Clapp are both retired school teachers, Larry from Green Hill and Vine Middle School and Gay with 35 years experience including Halls Middle School.

You can contact the Corryton Senior Center by calling (865) 688-5882 or find them on Facebook or the internet at knoxcounty.org/seniors/corryton.php. For information or to book a bus trip you should call Larry Clapp at (865) 274-9063. He said senior passengers need not be Center members and there’s no age requirement but added, “We cater to the Community Club people.”

The Corryton Senior Center is open Monday through Friday from 7:30 a.m. until 4 p.m. It is located at 9331 Davis Drive just off Emory Road.