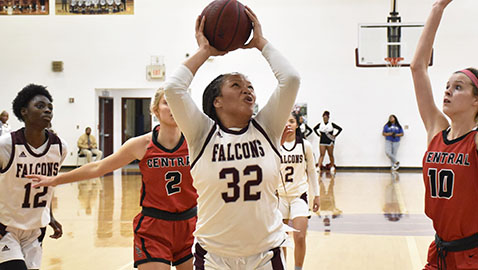 Cadence Horner was clutch at the free throw line when her team needed it most.

Horner, a guard for the Central High School girls basketball team, made six foul shots in the final minute of the Lady Bobcats’ 50-47 victory over Fulton Thursday night at Jody Wright Arena.

Horner had missed a pair of free throws early in the fourth quarter, but she made foul shots that mattered most and she did the same thing approximately 24 hours earlier when Central notched a victory on the road at Lenoir City.

“Cadence made some big free throws tonight and she made six last night that were big against Lenoir City and we knew she could make them,” Central coach Ben Collins said. “This was our third game this week and we got off to a slow start.”

Slow start or not, the Lady Bobcats manufactured enough offense to open a slim 10-8 advantage by the first quarter’s end. Central managed to extend its lead to 23-19 by halftime.

The Lady Falcons, who obviously had their own offensive struggles in their Senior Night contest, broke out of the slump and scored 17 points in the third frame, nearly doubling their offensive production from the first half.

Fulton stepped up its defense as well as it surrendered just nine points in the third stanza after which, it held a 36-32 lead.

The Lady Falcons extended their advantage to 39-34 with 7 minutes, 32 seconds remaining in the fourth quarter, but Fulton’s lead quickly evaporated as Scout Horner knocked down consecutive shots, including a 3-pointer to tie the game, 39-39, with 6:42 to go.

From there, the game was a roller coaster ride but the Lady Falcons got their last lead, a 43-41 advantage when Damiona Williams scored at the 2:41 left.

Central’s Mackenzie Babb re-knotted the game before Cadence Horner made four straight foul shots to give the Lady Bobcats a 47-43 lead with 29.7 seconds remaining.

The Lady Falcons would pull to within 47-45 on a basket by Rajanae Bailey before Cadence Horner made her final two free throw attempts to give the Lady Bobcats a 49-45 advantage with 9.6 seconds left.

Fulton, however, didn’t go away. Williams scored with 0.6 seconds left and was fouled.

She intentionally missed the subsequent free throw that went out of bounds.

Babb and Cadence Horner each scored 15 points for the Lady Bobcats and Scout Horner added 12.