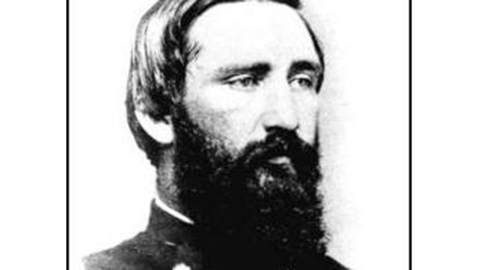 In the spring of 1863 Cumberland Gap was firmly in Confederate hands and it seemed, for a few months, that the war had moved elsewhere. However, by September the historic pass would again come under siege and then fall to the forces of General Ambrose Burnside in a confusing situation that is still debated.

Burnside’s route to take the gap was similar to Morgan’s the year before, in that he bypassed a direct attack by taking to the mountains to the west and approaching the fortifications from the south. Yet the eventual route of the mass march was tested and tried a month earlier in a daring raid by some 1,500 cavalry under the noted Colonel William P. Sanders.

Burnside planned two actions against the Confederates at the same time, sending General Julius White against the salt works at Prestonsburg, Kentucky, and Sanders on a quick hit-and-run excursion aimed primarily at the East Tennessee railroads.

Sergeant “Studs” Reynolds, of Cooper’s original First Tennessee, served as guide for the ambitious raid. A year earlier he had guided various raids from Camp Spears and Cumberland Gap into the mountains to Confederate camps.

The raiders left Mount Vernon, Kentucky, on June 14th, rode to Williamsburg, then to Marsh Creek in McCreary County, Kentucky, and south to Huntsville, Tennessee, up Brimstone Branch, and over Cumberland Mountain to exit at Wartburg.

At Wartburg Sander’s force surprised a rebel camp and skirmished with them, and captured the garrison. Sanders then went to Lenoir Station, burned the depot, a cotton factory, and destroyed telegraph lines and railroad track there. Sanders captured an artillery detachment there, three cannons, eight officers, and 47 lower-ranked rebel soldiers.

He was preparing to burn the Lenoir Cotton Mill when Dr. Benjamin Ballard Lenoir passed among the Union troops displaying secret Masonic signs and the historic mill was spared.

By June 19th Sander’s force, with prisoners and captured equipment along, began an assault on rebel forces in Knoxville. Union loyalists, mountaineers, and bushwhackers had been operating openly in Campbell County, and had lured forces under Confederate General Simon Bolivar Buckner out of Knoxville to search for them near Big Creek Gap, leaving the city with few rebel troops.

Sanders attacked from the north, against perhaps 1,000 Confederates, and the artillery battery lasted about an hour. He realized that even if he captured the town that he could not hold it against returning rebel forces.

Remembering his original orders to destroy communications, he ended the assault and galloped his force to Strawberry Springs. He continued the destruction and on June 21, was in New Market. Following two brief fights near there, he decided to circle back into the safety of Kentucky, having proven that a Union force could penetrate east Tennessee by way of the distant Cumberland Plateau. He then took his force toward Roger’s Gap west of Cumberland Gap, crossing the Holston River at Hayworth Bend, going through Clinch Mountain at Powder Springs Gap, reaching Powell Valley and skirting the rebel stronghold at Cumberland Gap.

By then his captives had risen to 120 rebels and his train of stores, equipment, cannon and soldiers stretched out some length. When he approached Roger’s Gap he found the high gap, used the year before by Morgan’s Yankees and Kirby-Smith’s rebels, was heavily blockaded with fallen timbers and guarded by Confederate artillery.

Big Creek Gap, to the west, was likewise fortified, so Sanders was forced to look for a third way out of the rebel lines and into the safety of Kentucky. He chose, no doubt with the advice of Sergeant Reynolds, a little-known mountain pass some three miles from Roger’s Gap known as “Smith’s Gap.”

This path across was extremely narrow; Sanders called it a “wood path.” It permitted the passage, with care, of only one man or one horse at a time. To reach Kentucky this way, Sanders was forced to dump most of his equipment and artillery, including much he had captured.

“The guns, carriages, harnesses, and ammunition were completely destroyed and left,” he reported. “The artillery was simply abandoned.”

On June 24th his force rode into Boston (now Lot), Ky. , near Jellico, and camped in safety at the site of old Camp Spears. He reported that part of his force became separated after climbing Cumberland Mountain, but had rejoined him at Boston.

Sanders reported to his superiors that during the entire expedition he lost only two men killed by the enemy, four wounded, and thirteen missing, of which five drowned. In his final report of the mission he also praised Sergeant Reynolds and other guides loaned to him from the First Tennessee Regiment.

On October 23, 1863, Sanders was promoted to brigadier general, and less than three weeks later, the Union occupied Knoxville after forcing out rebels who for two years had controlled the city and, from there, East Tennessee.

Sanders was ordered by General Ambrose Burnside to dismount his cavalry and hold a hillside against attacking rebels so fortifications at several points could be completed.

General Sanders stationed his remaining cavalrymen, now only about a thousand strong because of losses, along a hill about one-half mile west of Third Street. William Marvel, in his book “Burnside,” wrote that Sanders sent out part of his men to guard the Clinton Road and quickly created a breastwork on the hill out of fence rails.

There, despite heavy shelling and constant gunfire, Sanders held his men and his position by sheer personal example. He stood upright just behind the rails, where both his men and the enemy could see him directing the battle. Several times he rallied his men, who wanted to retreat to the safety of the city.

Then came a round of fire from two South Carolina rebel regiments, and Sanders was hit. He fell to the ground, and his men carried him away on a makeshift stretcher, giving up their position to the enemy. Sanders died on November 16, and was buried in a nighttime silent ceremony between battles in the First Presbyterian Church cemetery. His body was later removed to the Chattanooga National Cemetery.

Burnside noted later that General Sanders gave his life to save Knoxville from capture, holding off the enemy and maintaining his position longer than was required for the defense works to be completed. He is an authentic Union hero and left a mark in history and name in Knoxville’s history.