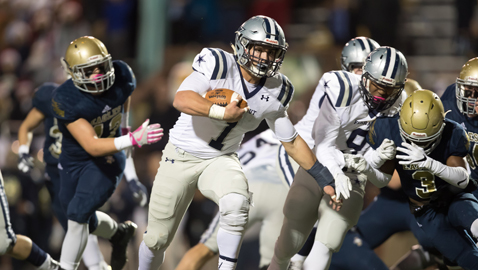 Cooper Hardin’s orange cleats didn’t go with Farragut’s Navy Blue and Gray uniform color scheme. They stuck out like a sore thumb, you might say. But that was his reason for wearing them.

Cooper said he wore them simply to help his mom pick him out during games. Laura Gearhiser could have spotted him from miles away, too.

Hardin said he wore red cleats his junior season and wanted to stick with that color.

“But when you have a size 14 foot, it’s kind of hard to find the right cleats with the right color,” he said.

So, the orange cleats became the first thing anyone would notice about Hardin this past season, but there were other things – more important things – that brought attention to this high school football player. Quite simply, he stood out on both sides of the ball.

Navy Head Coach Ken Niumatalolo no doubt saw his multiple talents and offered Hardin an opportunity to play at the prestigious academy in Annapolis. Cooper officially stepped aboard by signing scholarship papers Wednesday morning at FHS.

“It’s a great honor to have the opportunity to serve my country at one of the most prestigious institutions in the nation,” said Hardin. “It’s really exciting to see all the opportunities I would have after football that the Naval Academy might present me … It feels like a deal that’s too good to be true.”

“You couldn’t be any more proud for a young man,” said Courtney. “Cooper has the grades, with a GPA over 4.2. He’s a very bright young man and in our opinion a Division 1 type prospect. Navy loved him when they saw everything about him.

“Their head coach and two offensive coaches were here right before the dead period and sealed the deal.”

The 6-2, 230-pound Hardin excelled as a running back and linebacker as he helped lead the Admirals to the Class 5A state championship in early December, the school’s first-ever state title.

He’ll start out as a fullback with the Midshipmen.

“Their offense is a double slot with a big fullback and a big running back,” said Courtney. “They’re going to give him a shot to play offense and that’s what he wants to do.”

“Before they offered me, my Dad (Kevin Hardin) and I always watched the Navy-Army game on TV, but I had never thought of playing there,” said Cooper. “I thought Navy would be a cool place to go and see what the whole Naval Academy experience was like.”

He took an official visit to Annapolis the second week of January, and he said his choice “seemed pretty clear after that visit and meeting coaches and players.”

Hardin, who will have a five-year commitment to serve after his four years at the academy, is considering cyber defense operations as a major or pre-med or engineering.

“I’ve had four or five former players go to the academies and did well after serving their commitments,” said Courtney. “We’re excited about Cooper. We think he will do well.”

Even without orange cleats.