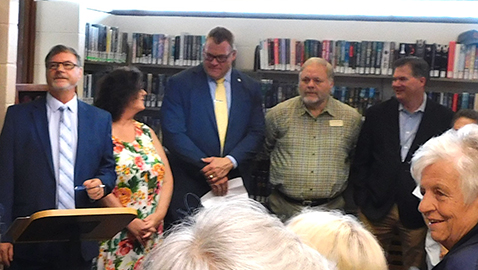 Lynn Redmon, a Norwood and Knoxville community leader, passed away last year and was memorialized Wednesday as the Norwood Public Library building was named for him. Redmon was known and respected for being a spokesman for neighborhood causes, a political consultant, and an all-around nice gentleman.

Former Knox County Chairman and current Commissioner Randy Smith hosted the meeting which drew dozens of city and county officials, neighborhood leaders, former officials, and friends of Redmon. On hand for the ceremony were Redmon’s daughter, Renee, and his long-time companion Sue Rickabaugh.

Commissioner Smith noted that Redmon’s late wife, Ann, worked for 30 years at the library and he called Redmon a “guiding star” that helped him get elected. He noted that Redmon was a strong supporter of the library, active in the Norwood neighborhood, and was a local historian.

“His efforts made the community and the county better,” Smith said.

Knox County Mayor Glenn Jacobs spoke briefly and said that it is “fitting that the library be dedicated to Mr. Redmon.”

Also present were Knoxville Mayor Madeline Rogero, Commissioners Evelyn Gill, Carson Dailey, Michele Carringer, Brad Anders and Larson Jay, and a representative of Congressman Tim Burchett. Many other officials were also present. The library has a plaque to Redmon inside the building.