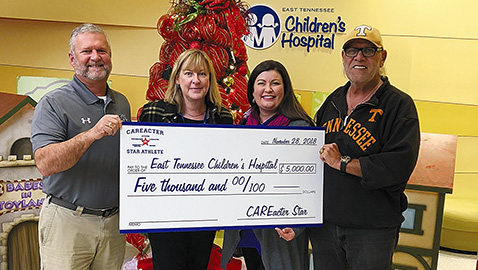 This year’s Community Service Games raised $5,000 for the East Tennessee Children’s Hospital, with the donation designated for the NICU program and specifically for infants born with Neonatal Abstinence Syndrome.

Seth Linkous, Director of Marketing at East Tennessee Children’s Hospital, opened the games with the coin toss for the first contest.

Gunner Smith, last year’s beneficiary, did the coin toss for the RePublic vs Cumberland Gap game. The 11-year-old from Powell received his last chemotherapy treatment on Oct. 31 and has been declared cancer free. He was joined by his father, Brandon, and his uncle and grandfather who had flown in from Texas to celebrate his successful year of treatments.

Dave Moore, founder of the Careacter Star Athletes program, which also is part of Care 365, said the Community Service Games are a “win, win, win” event, as teams compete but no score is officially kept.

“Everyone goes home with a good feeling, knowing they have played to support a great cause in the game of life,” he said.

HALLS SEARCH: Jeremy Bosken has resigned as head football coach after one season at Halls High and is now the new coach at Boyd Buchanan.

“Coach Bosken was offered an incredible opportunity with Boyd Buchanan and we wish him and his family the best in the future,” said HHS Athletic Director Meagan Booth, adding that the process to find a new coach for the Red Devils is underway.

“We are currently accepting applications for the open position. The hiring team will begin interviews this week with hopes to have a new coach in place in January.”

ROAD TO FAME: Nomination ballots for the inaugural Halls High School Athletics – Road to Fame are available through Jan. 31 and can be picked up at the Halls High school office, Hallsdale /Powell utility office and Phil Nichols State Farm Insurance office. The ballots, after being correctly filled out, will be turned into Halls High School’s main office.

The submitted nomination ballots will be collected and the Selection Committee will begin the process of selecting the 12 athletes for the first class of inductees into the Road to Fame.

Madison has been a student at FBA since the second grade and Lucas since the sixth grade.

CORRECTION: It was Austin Humphreys – not Allen Humphreys as mistakenly reported  – who bowled the perfect 300 game for Knoxville Catholic in the recent District 4 tournament. Austin was one of the top bowlers in District 4 again this season and already has qualified for the individual competition at this year’s TSSAA state tournament.

The Focus apologizes for the error in the Dec. 17 issue.