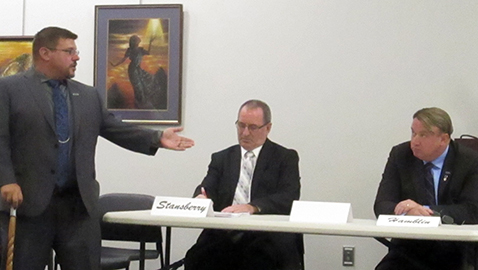 Eight candidates in a field of 14 seeking to replace Congressman John Duncan appeared at the monthly East Knoxville Community forum last week. Each made opening and closing statements and were asked questions submitted by the audience. Community leader Michael Covington hosted the gathering and Hubert Smith presented the questions. Key issues discussed included the Affordable Care Act, fixing Veterans Health Care, a new Supreme Court Justice appointment, building a wall at the Mexican border, lobbyists and their influence, foreign trade wars, separating children from immigrant parents and whether or not the news media is the enemy.

Greg Samples was the only Independent candidate to attend.

Absent but appearing on the primary ballot were Republicans Tim Burchett, Sarah Nickloes and Jason Emert. Independents not appearing for the forum included Jeffrey Grunau, Keith LaTorre and Mark Whitmire.

In his introductory statement, Williams said he is experienced in health care as a psychologist, teacher and parent. Samples said he is a Libertarian and said that government doesn’t work. Hamblin said he has his finger on the pulse of the district and is a 26-year retiree of the Army.

Stansbury said he is experienced in security and a veteran. Sagliano said he is a veteran, a business owner and that family is important. Hoyos said she is on unpaid leave with 17 years of policy experience in water quality issues.

Matlock said, “I’ve done all of the above” and said he offers himself as the total package and is not a politician.

Many of the primary candidates gave similar answers on some questions and parted ways on other issues, such as the Affordable Care Act. Matlock said it doesn’t work and health care should be “pushed to the states.” Hoyos said the ACA “has good bones,” called on Congress to raise the Medicare age to 65 and suggested more competition in the market.

Sagliano said he doesn’t agree with the way the ACA was set up and called health care a state’s right. Hamblin called the need for health care “common sense” and said any plan should be something everyone can afford.

Samples said that the ACA amounts to a government monopoly,  a “personal problem” and that government needs to get out of the way.

Williams said the Affordable Care Act needs to be repaired and the problem will never be solved as long as there is a profit in it.

Schenkenfelder said the ACA should be kept and health insurance plans be made more affordable.

All the candidates agreed that there are problems with health care through the VA. Many called for an expanded “Choice Care” program and Samples called for getting rid of the Veterans Administration and let veterans seek their own services in an open free market.

Hoyos said, “We can’t have small government and VA care” and called for more funding.

Williams recalled Republicans holding up and then turning away the appointment of Obama’s choice. Stansberry said congress is waiting to “make folly out of the process.”

Building a wall on the Mexican border

Sagliano called for building a wall also along the Canadian border. Stansberry said the country does not need a wall in every area and called on congress to deal with criminals coming across the border. Hamblin favors the wall and said that criminals and terrorists are coming in.

Schenkenfelder said he doesn’t “build walls, I tear them down.”

All the candidates said they would not let lobbyists influence their votes. Hoyos said that lobbyists play a role in supplying information and Matlock said every person should be a lobbyist. He then noted that Tim Burchett, who was absent from the forum, should be asked the same questions.

All the candidates agreed that President Trump’s policy of separating children from their parents is wrong. Matlock said separating the two is “one more reason to build the wall.” He said, “Our hearts go out for the families but we must support the rule of law.” He said people should come in the right way and said, “Let’s be Christian-like.”

Hoyos called for a “pathway to citizenship” and said the separation “needs to stop.”

Schenkenfelder said the press should always be free. Williams called the media “the pillar of Democracy” and said that “information keeps us going.”

Samples said that the news media serves advertisers and said most people now get their news on the internet. Hamblin said the media is neither an enemy or an ally and is important. Stansberry said the media should be like the old TV show “Dragnet” and present “the facts and just the facts.”

Sagliano said the media is sometimes biased if you look at just one source.

Matlock used the question to call for a large open forum for candidates and asked the other candidates to join him.