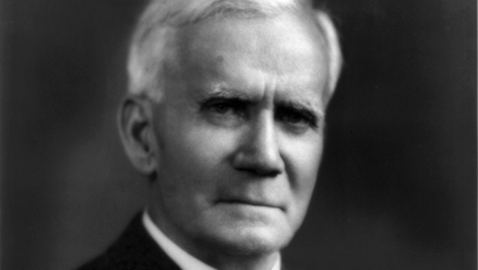 For so many of us, members of Congress from other states are of little interest, yet so many of those faceless individuals have compelling stories and remain in the House of Representatives for decades, accruing seniority and power.  Robert Crosser served in Congress for thirty-eight years and it would likely have been longer still had he not held fast to his own beliefs and bucked a president of his own political party by opposing the draft in wartime.  The son of poor Scottish immigrants, Robert Crosser was born in Lanarkshire, Scotland and came to the United States when he was seven years old.  Eventually, Crosser attended Kenyon College in Gambier, Ohio where he worked his way through school as a dormitory janitor; he also played right tackle on the football team.

When Robert Crosser announced for Congress in 1912, the Republican Party was split asunder by a bitter fight between incumbent President William Howard Taft and his predecessor, Theodore Roosevelt.  Roosevelt refused to accept the results of the Republican National Convention, which renominated Taft.  Roosevelt bolted and ran on a third-party ticket, which aided the campaign of the Democratic candidate, Woodrow Wilson, the governor of New Jersey.  Few gave the young Cleveland lawyer much of a chance, especially as Crosser was running for Congressman-At-Large, meaning if elected, he would represent the entire state in the House of Representatives.  Crosser ran as a supporter of Wilson as well as the working man even though he had been taught the law by William Howard Taft.  Earning a reputation as “Fighting Bob” for his game campaign, Crosser made it quite clear he was the friend of the laboring man and organized labor.  Robert Crosser spoke all over Ohio, discussing the tariff and denouncing the “trusts” of great corporate wealth.  Much to the surprise of virtually everyone, Robert Crosser became the first person ever to be elected as Congressman-At-Large from Ohio.  Crosser ran for reelection from the Twenty-First District of Ohio in 1914 and was popular enough that he defeated the incumbent, Robert J. Bulkley, in the primary.  Bulkley had enjoyed the support of Newton D. Baker, the mayor of Cleveland and the congressman’s defeat was considered a setback for the city machine.  It was also a tribute to Congressman-At-Large Robert Crosser’s own personal popularity in his home city.  The Cincinnati Enquirer noted Bulkley had been the “personal choice” of Mayor Baker while Crosser was affiliated with the “ultra-radical element” of Cleveland.  Newton Baker had wanted Crosser to run in Ohio’s Twenty-Second Congressional District, so as not to oppose Congressman Robert J. Bulkley, but Crosser, proving to be as stubborn as many a Scotchman, refused and insisted upon running in the Twenty-First.  Crosser won the general election and was reelected in 1916.

Robert Crosser’s political independence cost him dearly in 1918 when he voted against the wartime draft, as did his colleague from Cleveland, William Gordon.  The refusal of Congressmen Crosser and Gordon to support the wartime draft infuriated the most important daily newspaper in Cleveland: the Cleveland Plain Dealer, which promptly editorialized, calling for the defeat of Robert Crosser and William Gordon at the polls.  “One unmistakable duty confronts the voters of Cleveland this year,” the Plain Dealer thundered.  “It is to defeat William Gordon and Robert Crosser in their effort for re-election to Congress.”  The Plain Dealer did not quite call the two errant congressmen German sympathizers, but certainly insisted they were hurting America’s war effort.  “From the beginning of America’s controversy with the German imperial government these two Sixth City Democrats have done about everything in their power to hamper their own government,” the Plain Dealer editorial said.  “Whatever have been their intentions, the effect of their actions has been to assist the Kaiser in his outrages against America and to impede the progress of the United States government in retaliation.”  The Plain Dealer said it should be the “duty and pleasure” of every Democrat to defeat Crosser and Gordon in their respective primaries; failing that, the “loyal” voters could defeat the congressmen in the general election.

When asked why he wished to run for Congress, Robert Crosser gave a concise and logical reason for his political ambitions.  “I sought a seat in Congress because I believe the best place for a man who has a philosophy of things is in the lawmaking bodies where he may speak openly, and freely advocate principles believed by him to be right.”

With most Americans solidly behind both President Wilson and the war, the Cleveland Plain Dealer’s campaign against Congressmen Crosser and Gordon, with the support of the Cuyahoga county machine, was successful.  Both Robert Crosser and William Gordon lost their respective primaries.  Crosser was succeeded in Congress by Democrat John J. Babka, but the former congressman ran again in 1920.  It proved to be a banner year for Republicans with Ohio U. S. senator Warren G. Harding at the top of the ticket.  Both Babka and Crosser lost to the Republican candidate.  The irrepressible Robert Crosser ran again in 1922, won the Democratic nomination and defeated the GOP incumbent Harry Gahn.  Like Crosser, Harry Gahn did not give up easily and would attempt to return to Congress four more times, the last being in 1944.  Robert Crosser kept a stranglehold on the Twenty-First Congressional District, remaining in office until 1955.  Crosser’s views on the wartime draft never changed and he voted against similar proposals under presidents Franklin D. Roosevelt and Harry Truman.  Nor was Bob Crosser done feuding with the Cuyahoga Democratic machine.

Crippled by severe arthritis, Robert Crosser was confined to a wheelchair after sometime in the early 1940s.  As he aged and became more infirm, opponents inside his Congressional district tried to run him out of office, a notion he strenuously resisted.  Crosser once again ran afoul of the local Democratic party machine in 1948 when he refused to approve the nomination of a particular local to be the Postmaster of Cleveland.  That refusal brought him serious opposition in the form of Emil A. Bartunek, the personally popular Executive Secretary to Cleveland mayor Thomas A. Burke.  Two years previously, Bartunek, then a state senator, had pressed Crosser hard.  Once again, Bartunek ran hard against Congressman Crosser, but lost the primary by just over 3,000 votes.  Undeterred, the machine ran Bartunek again in the 1950 Democratic primary with the same result.

Almost eighty years old when he began his last reelection campaign, Robert Crosser, like many another aging incumbent, bristled at the notion age and infirmity had diminished his ability to serve his constituents.  Referring to his wheelchair, Congressman Crosser joked, “All I need is a little axel grease and I can outrun the young fellows.”  If pressed further, Crosser would angrily bark, “I’m as active as the best of my colleagues!”

Congressman Robert Crosser employed his daughter Barbara from 1929 until he left Congress in 1955.  Two of Crosser’s four children, Justine and James, died quite young.  Justine left a husband and two very young daughters when she died at age twenty-nine.  Barbara Crosser married Charles Sweeney, who had been married to her older sister Justine.  Barbara Crosser Sweeney helped to raise her late sister’s two daughters and legally adopted them in 2005 when she was ninety-four years old.    While Crosser’s son and namesake, Robert, Jr. was also employed in his Congressional office, it was Barbara Sweeney who was his closest aide.  Mrs. Sweeney wrote press releases, news columns, and ran her father’s reelection campaigns, which became more difficult, at least physically when Crosser was confined to a wheelchair.  In 1954, Congressman Crosser was facing several opponents inside the Democratic primary, including Stephen M. Young, who had served four terms as Ohio’s Congressman-At-Large in 1932, 1934, 1940, and 1948, as well as John Holly, a leader in the local African-American community.  Mary K. Sotak, a local city councilwoman, was running against Crosser, as was Charles A. Vanik, a local municipal judge who had been a member of the Cleveland school board and an Ohio state senator before the World War.  Vanik had run against Crosser in 1946 and lost decisively and the Congressman seemed not to be worried, especially with his opposition divided.  Crosser announced his daughter Barbara would once again return to Cleveland to run his reelection campaign and serve as his surrogate in the district while he remained in Washington, D. C.  “She knows my views so well she can do a better job than any other person.”

Over time, the population of a Congressional district changes.  Ohio’s Twenty-First District in 1954 was almost evenly divided between blacks and whites, with the white folks largely being Democrats and the African-American population still largely supporting the Republican Party.  The eventual Republican nominee inside the Twenty-First District was seventy-eight year-old Francis E. Young, a former state representative who had helped to found Cleveland’s local chapter of the NAACP and had been active in the postal workers’ union.  Local allegiances were also beginning to change, as evidenced by the candidacy of John Holly inside the Democratic primary.  Holly was the founder and head of the Negro Future Outlook League in Cleveland.  Eventually, the district would become a majority black district and elect Louis Stokes to Congress.

Congressman Crosser confidently expected to be renominated in the Democratic primary and was surprised to be upset by Charles Vanik by just over 500 votes.  The weather on Election Day was terrible and many voters were complacent and many of Crosser’s supporters did not bother to go to the polls.  Robert Crosser was reputed to be bitter at his defeat and clearly did not wish to retire.  In late November of 1954, Crosser made the announcement he would run for Clerk of the House, a statement which was greeted by a deafening silence.  Nothing more was heard about Crosser’s candidacy to become Clerk of the House.

As Robert Crosser’s time in the House was coming to an end, colleagues began paying tribute to his service.  John Shelley, a California Democrat, praised Crosser for what the Ohioan had done for railroad workers.  “The Railway Labor Act of 1934 and Railroad retirement acts of 1934 and 1935 were something more than enlightened legislation for the special benefit of railroad labor,” Shelley said.  “In writing those measures and securing their enactment, Bob Crosser blazed the trail for much of the great social welfare legislation which came into being in succeeding years of Franklin D. Roosevelt’s administration.”

Perhaps the most fitting tribute came from Speaker of the House Sam Rayburn, who said, “I never knew a man in or out of public life that I thought had a higher sense of justice, a greater devotion to public service and trying to serve his day and generation well and make this country better while he lived and leave it better for those who came after than Bob Crosser.”

In his own farewell speech to Congress, Robert Crosser said as he looked back over his own career, he was proud he had stuck with his own beliefs, irrespective of the political consequences.  “We often hear sentimental balderdash about dying for one’s faith,” Crosser said.  The old congressman then softly quoted from a poem by Ernest Crosby, which began:

“So he died for his faith.  That is fine.

“More than most of us do.

“But say, can you add to that line.

Robert Crosser retired to his home in Bethesda, Maryland where he spent the two years of his retirement reading and writing.  Until the very end of his life, his mind was clear and he died four days before his eighty-third birthday.  Robert Crosser had lived for his faith and beliefs, too.