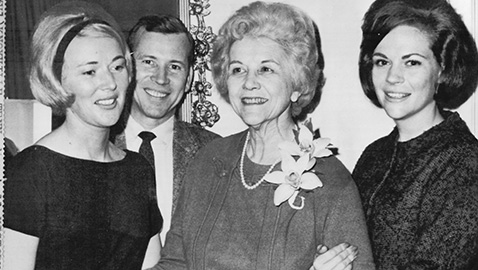 Edith Irene Bailey Baker is the only woman to represent Tennessee’s Second Congressional District in the U. S. House of Representatives.  For those folks who recall Irene Baker today, it is usually because she was the step-mother of U. S. Senator Howard Baker.

Irene Bailey Baker was born in Sevierville and began working as a deputy in the office of the County Clerk for Sevier County.  Ms. Bailey then worked as a deputy in the office of Sevier County’s Clerk and Master.  Evidently Irene was married, but her husband died and she went to work for the Tennessee Valley Authority.  At some point she met Howard H. Baker, a native of Scott County, an ambitious young attorney and aspiring politician; they married on September 15, 1935.  Howard Baker was a widower with two small children, Howard, Jr. and Mary Elizabeth.  Howard and Irene Baker would also have a daughter between them, Beverly Irene Baker.

Howard Baker had been the district attorney for a collection of counties surrounding his native Scott County before winning the Republican nomination for governor in 1938.  Tennessee Democrats had waged a brutal and bitter factional battle for party dominance between incumbent Governor Gordon Browning and Tennessee’s senior United States senator, Kenneth D. McKellar and McKellar’s friend and political partner, E. H. Crump, head of the Shelby County political organization.  At stake was the governorship and a seat in the United States Senate, held by George L. Berry, who had been appointed to the vacancy caused by the death of Nathan L. Bachman by Governor Browning.  McKellar and Crump won the fight and dominated Tennessee politics for the next decade.  If Howard Baker expected renegade Democrats to support him and catapult him into the governor’s mansion, he was much mistaken.  Baker was handily defeated by Democratic gubernatorial nominee Prentice Cooper of Shelbyville.

Baker was the GOP nominee for the U. S. Senate in 1940 against the venerable McKellar.  Senator Baker once told me his Great Aunt Mattie worked for Senator McKellar.  Apparently Great Aunt Mattie was quite something, as Senator Baker recalled she could curse as fluently as any man, drank as well as any sailor and chain smoked cigarettes.  Young Howard Baker remembered visiting his Great Aunt Mattie in Washington, D. C. in 1939.  I speculated his father’s race against Senator McKellar in 1940 must have led to really interesting conversation at the dinner table.  Senator Baker laughed and replied nobody, including his father, thought Howard Baker, Sr. could defeat the deeply entrenched McKellar who was at the peak of his power in Washington and popularity in Tennessee.

Baker enjoyed a thriving and prosperous law practice.  Howard Baker, Sr. remained active in Republican politics and was allied with the faction of Carroll Reece, former congressman from upper East Tennessee.  Reece had left Congress in 1946 to become Chairman of the Republican National Committee.  By 1950, Reece was considering a return to Congress by running against his successor, Dayton Phillips.  The incumbent congressman from Tennessee’s Second Congressional District was John Jennings, Jr.  Congressman Jennings was opposed by Guy Smith, editor of the Knoxville Journal and Chairman of the Tennessee Republican Party.  Jennings had been in Congress since 1939 when he had won a special election following the sudden death of Congressman J. Will Taylor.  Howard Baker challenged John Jennings inside the Republican primary and won decisively.  Baker carried every county in the district and ended the political career of John Jennings, Jr.

Howard Baker, Sr., unlike his predecessor in Congress, remained an enduringly popular figure inside his congressional district.  Although Carroll Reece had been in Congress since 1923 with three absences, Baker came to play a greater role inside Tennessee’s Republican Party.  Still, the Republican Party’s successes were largely confined to East Tennessee, although things were slowly beginning to change.  In 1952, General Dwight D. Eisenhower became the first Republican to carry the Volunteer State since Herbert Hoover in 1928.  President Eisenhower repeated the feat in 1956 when Tennessee’s senior U.S. senator, Estes Kefauver, was the vice presidential nominee.  Richard Nixon won Tennessee by a much greater majority than had General Eisenhower when he ran against John F. Kennedy in 1960.  Congressman Baker had been reelected in 1962, winning more than 70% of the vote.

Howard Baker, Sr. was Chairman of Tennessee’s Republican Party when young Bill Brock won the Third Congressional District in 1962.  Irene Baker was Tennessee’s Republican National Committeewoman from 1960 – 1964.  Longtime congressman Carroll Reece died of lung cancer on March 19, 1961, leaving Howard H. Baker, Sr. the most powerful Republican in Tennessee.  Reece was succeeded in Congress by his widow, Louise, who was the daughter of immensely wealthy former U. S. senator Guy Goff of West Virginia.  So, too, would Howard Baker be succeeded in Congress by his wife, Irene.

Accounts vary, but according to the Knoxville Journal, Howard Baker died of a heart attack while in the bathroom shaving on January 7, 1964.  Almost immediately, speculation centered on the late congressman’s son, Howard, Jr., as his successor in Congress.  Young Howard spurned the notion of succeeding his father in the House of Representatives; Howard, Jr. wanted to run for the U. S. Senate in 1964, precisely because he did not want to win elective office on his father’s name.  At the time, Tennessee had never popularly elected a Republican to the United States Senate.  Still, someone had to fill the remainder of the late Congressman Baker’s term, which expired in January of 1965.  There were numerous politicians eager to succeed Howard Baker and Howard Baker, Jr. urged his step-mother, Irene, to run.  Baker shrewdly concluded his step-mother’s candidacy would keep the Republicans inside Tennessee’s Second Congressional District united, as no other prospective candidate could.  The young Baker needed a united party if he were to be a serious contender for statewide office and when Mrs. Baker announced her candidacy, it cleared the field of GOP aspirants.  The late Congressman Baker’s political ally, Guy Smith, promptly urged the nomination of Irene Baker in a front page editorial on January 10, 1964.  Smith wrote that after the shocking loss of the “beloved” congressman, the outpouring of support for Irene Baker from both Republicans and Democrats was nothing less than astonishing.  The Journal pointed to the example of Louise Reece succeeding her husband in the First Congressional District as the result of almost “universal sentiment.”  The Journal hoped “Mrs. Baker will accede to the wishes of these thousands of citizens of the Second District.”  Guy Smith wrote that Irene Baker’s nomination and election to Congress was nothing less than “a gesture of appreciation for the long years of service” of a “beloved public servant.”  While that seems a highly patronizing point of view today, Smith also wrote Irene Baker would be no mere “token” in Congress as she was quite capable of serving the district well by both “experience and training.”  Smith believed Irene Baker fully capable of picking up where her late husband had left off.  Howard Baker, Sr., like his son, was a moderate Republican who fought hard for the Tennessee Valley Authority and federal programs like Social Security.  Baker had also perfected the constituent service to the people of his district which continued with succeeding congressmen John J. Duncan and John J. Duncan, Jr.

Tennessee was still a strongly Democratic state and 1964 was a presidential election year.  Both of Tennessee’s seats in the United States Senate were up for election.  Albert Gore was running for a third six-year term while Governor Frank Clement and Congressman Ross Bass fought for the nomination to serve out the remaining two years of the late Senator Estes Kefauver’s term.  Howard Baker, Jr. and Dan Kuykendall of Memphis were the GOP nominees for the U. S. Senate.  Democrats in Tennessee’s Second Congressional District were hopeful of pulling off an upset and fielded a respectable nominee in Willard Yarborough.

Born in Etowah, Tennessee in McMinn County, Yarborough earned his living as a reporter for the Knoxville News-Sentinel.  Yarborough worked for the Associated Press and the Knoxville Journal before joining the News-Sentinel.  Willard Yarborough was no mere reporter, but a journalist, having won awards for his reporting on corruption in politics.  Nor was Willard Yarborough a novice in politics, having been elected to the Knox County Quarterly Court, the predecessor to the Knox County Commission.  Some years before his death, Willard Yarborough told an interviewer he left the Knoxville Journal because he felt “it was being infiltrated by Republican politics and it didn’t suit me because I was a Democrat at heart.”  Yarborough never forgot Franklin D. Roosevelt and the National Youth Administration which “helped me find a job that paid for my tuition” at the University of Tennessee.

Yarborough complained in that same interview conducted twenty-four years after his 1964 congressional race that the Democrats inside the Second Congressional District were not entirely united.  It was certainly true the Democratic Party in Tennessee was frequently bitterly divided.  One such example in 1964 was the race between Congressman Ross Bass and Governor Frank Clement for the Democratic senatorial nomination.  It was also true Irene Baker was the beneficiary of sympathy as the widow of the late Congressman Howard Baker, as well as those who had been served by Baker’s highly efficient constituent service operation, which included Democrats and Independents, as well as Republicans.

When the 1964 campaign first began, Barry Goldwater, President Lyndon Johnson’s opponent in the presidential race, was polling ahead of the incumbent by 20 percentage points.  That was before the Arizona senator confirmed his resolve to sell the TVA to private interests.  Howard Baker later recalled when he heard Goldwater utter that sentence, he knew the GOP ticket was doomed to defeat.  Johnson was the first Democrat to carry Tennessee since Harry Truman in 1948.  Howard Baker and Dan Kuykendall lost to Ross Bass and Albert Gore, respectively, although they won better than 46% of the vote.

Irene Baker became the first woman to represent Tennessee’s Second Congressional District by defeating Willard Yarborough with 55% of the vote.  Willard Yarborough was once again the Democratic nominee in the regular 1964 election against Knoxville mayor John J. Duncan and won roughly the same percentage he had in the special election.

Congresswoman Baker went to Washington where she served out her term and Guy Smith was right; she served quietly, but effectively.  After returning to Knoxville at the expiration of her term in Congress in 1965, Irene Baker was named as the Director of Public Welfare for the City of Knoxville by Mayor Leonard Rogers.

I happened to know former congresswoman Irene Baker, who lived in the Mount Olive community of South Knoxville.  Mrs. Baker was highly respected, especially by the older voters who still remembered her.

The wife of a Republican congressman, elected to the U. S. House of Representatives in her own right, and step-mother to the first Republican ever elected to the United States Senate from Tennessee enjoyed relatively good health in her retirement and mother-in-law of a Republican congressman from Virginia.  After leaving employment as Director of Public Welfare for the City of Knoxville in 1971, she remained in her South Knoxville home until settling in an assisted living facility in Loudon County.  At age ninety-two, Irene Baker died of a massive heart attack while dining with friends at a restaurant in Loudon according to the Johnson City Press.  An obituary appearing in the Nashville Tennessean said Mrs. Baker died at Fort Sanders Hospital in Knoxville.  Where Irene Baker died is of little import, especially considering she lived a long and productive life, interested in her family, friends and community until the end of her days.

More than the widow of a popular congressman and step-mother to the remarkable Howard H. Baker, Jr., Irene Bailey Baker deserves to remembered for living a remarkable life, as well as the fact she is the only woman to have represented Tennessee’s Second Congressional District in the U. S. House of Representatives.