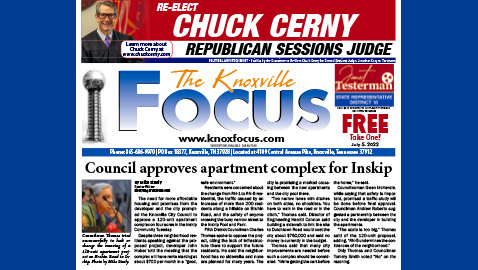 The need for more affordable housing and promises from the developer and the city prompted the Knoxville City Council to approve a 120-unit apartment complex on four acres in the Inskip Community Tuesday.

Despite three neighborhood residents speaking against the proposed project, developer John Huber told the meeting that the complex will have rents starting at about $700 per month in a “good, safe environment.”

Residents were concerned about the change from RN-1 to RN-5 residential, the traffic caused by an increase of more than 200 residents along a hillside on Bruhin Road, and the safety of anyone crossing the busy narrow street to the Inskip Pool and Park.

Fifth District Councilman Charles Thomas spoke to oppose the project, citing the lack of infrastructure there to support the future residents. He said the neighborhood has no sidewalks and none are planned for many years. The city is promising a marked crossing between the new apartments and the city pool there.

“Two narrow lanes with ditches on both sides, no shoulders. You have to walk in the road or in the ditch,” Thomas said. Director of Engineering Harold Cannon said building a sidewalk to link the site to Dutchtown Road would cost the city about $750,000 and said no money is currently in the budget.

Thomas said that many city improvements are needed before such a complex should be considered. “We’re getting the cart before the horse,” he said.

Councilwoman Gwen McKenzie, while saying that safety is important, promised a traffic study will be done before final approval. Councilman Andrew Roberto suggested a partnership between the city and the developer in building the apartments.

“The scale is too big,” Thomas said of the 120-unit proposal, adding, “RN-5 undermines the confidences of the neighborhood.”

Only Thomas and Councilman Tommy Smith voted “No” on the rezoning.