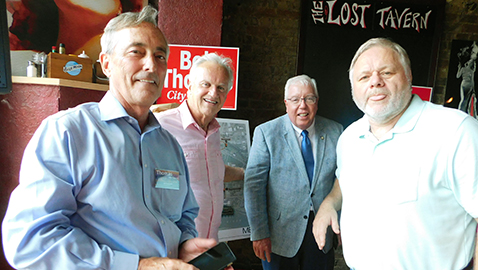 Bob Thomas has served on the Knox County Commission and he’s been a morning radio talk show host and he most recently ran for county mayor.

He was defeated in the 2017 by Glenn Jacobs, a professional wrestler and businessman.

Thomas didn’t stay out of politics long as he’s thrown his hat into the ring for a City Council seat.

He greeted his droves of supporters late Thursday afternoon for a press conference and reception at Market Square’s Downtown 211.com Properties.

“I’m fiscally conservative and I have opinions on Recode and the homeless and affordable housing,” Thomas told a packed room of supporters. “But today, I want to concentrate on Downtown Knoxville.

“It has changed. Downtown Knoxville is driving the city’s growth. I remember when the Old City was mostly just dilapidated buildings and I remember 10 years ago, you could go downtown and see three people.”

At one time, businesses fled the downtown area and Thomas remembers those days too.

“I remember when places were closing and people were leaving, there was an old jewelry store and there was a sign on it that said ‘When the last person leaves downtown, will you please turn out the lights.’”

While the downtown area has been revitalized and is in the midst of an approximate decade-long comeback, it’s not without its issues.

“The good thing about Downtown Knoxville is that it has five entertainment areas,” Thomas said. “You have the Convention Center, Market Square, the coliseum and auditorium, the Old City and Volunteer Landing and Neyland Stadium.

“The challenging thing is that you have five entertainment areas downtown that are not connected.”

Thomas has never been one to shy away from challenges. The longtime radio man and one-time chairman of the Knox County Commission made a possible breakthrough proposal to build a tram to connect those five areas.

The tram would not tie up traffic and it would make five stops on its line and Thomas said that it would take approximately 15 minutes to complete the run.

He also noted that that would make the parking lots at the Knoxville Civic Coliseum available for those wishing to attend the other venues. He added that the tram would also make it easier for coffee shops and similar businesses to open in the area adjacent to the coliseum.

The Old City/Ballpark Stop assumes that the Tennessee Smokies would return to Knoxville from Sevier County. Smokies owner Randy Boyd owns land in the Old City and has proposed building a baseball stadium downtown.

While Thomas has a lofty vision, he knows a change like this won’t come quickly, he said he knows it can happen.

“I know this won’t happen next year and it may not happen in 10 years,” he said. “But the biggest ideas start with one person. If we believe in each other and help each other, it can happen.”

Thomas also proposes that the tram would be built by a private company such as an entertainment company because it would provide tourists with an aerial view of Knoxville.

Thomas has had broad vision before. He was one who thought hockey could work in the city.

“In 1989, we brought the Knoxville Cherokees in,” he said. “I thought hockey could work and the Cherokees were one of the founding members of the East Coast Hockey lead and I promoted hundreds of their games.”

The Cherokees left East Tennessee but the sport remains strong. The United Hockey League brought fans the Speed and now the Ice Bears remain a big draw for the city.