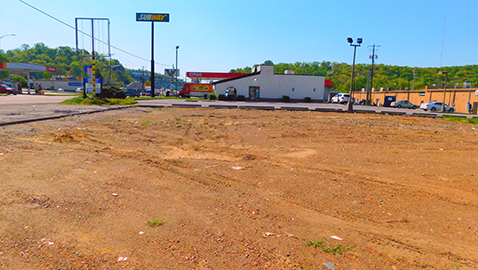 The zoning request for higher density along Merchant Drive was changed by the Knoxville City Council Tuesday at the request of Norwood community homeowners.

Hilton Capital Group, represented by Benjamin C. Mullins, had requested a zoning change from Neighborhood Commercial and Agricultural with Hillside Protection to RN-5, General Residential. The change was not recommended by the planning staff but passed the planning commission in a 13-1 vote. If approved commercial businesses would develop along the front seven acres along Merchant Drive and multi-family dwellings would take up 21 acres. The back portion of the property is hilly and would not be used.

Councilman Charles Thomas led the move to change the requested zoning to RN-3, which he said is acceptable to the neighborhood. Local homeowners were concerned about an increase in local traffic along the busy connector road, flooding, and the addition of students to nearby schools.

Councilwoman Lynne Fugate recused herself from the vote because she is CEO of the Girl Scout’s Council, which sold the property to the developer. The vote was 8-0-1.

Various nominees for the proposed Sports Authority spoke to the council. Deputy Mayor Stephanie Welch said that funding of the Authority will come back to the city and county this fall.

Mayor Indya Kincannon urged approval of the members to “make sure the city’s interest is protected.”

Councilwoman Amelia Parker asked that a benefit agreement be signed with Boyd Sports before the project moves forward. She was critical of the project “going full steam ahead” and called for more public involvement.

Welch pointed to a $13.5 million grant promised by the governor which would reduce the amount the Sports Authority would need to borrow.

Councilwoman Lynne Fugate said some answers about the project can’t be answered until the Sports Authority is up and running. Welch said the city will have a website soon to answer questions about the project.

Councilwoman Janet Testerman called the nominees a “rock star slate” and the vote was 8-1 to approve the candidates.

A request for a zoning change at the former site of Penny Pawn on Broadway in Fountain City was postponed after Councilman Thomas questioned if the former pawn shop has been demolished.

Thomas is opposing the change that would permit an oil change business to locate there. The change would designate the narrow property as CG-1 and change the set-back requirement.

He said there are several auto service centers along the route and another would add to the clutter and harm walkability.  The postponement passed 9-0.