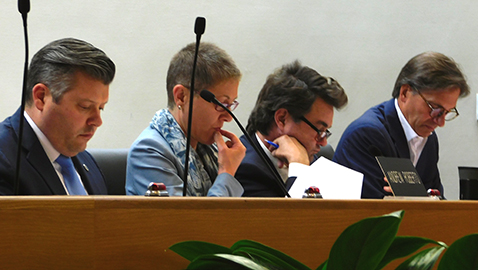 The Knoxville City Council went back and forth with suggested changes to the proposed Recode regulations for over six hours last Tuesday. Just about anything related to zoning, building heights, setback, and permissible uses of land is wrapped up in the proposed changes. By the end of the long session the council had only reviewed nine of the 16 sections of the 400-page long fifth draft of the proposal.

Councilman Marshall Stair, the only council member in the race for city mayor, let it be known at the beginning of the meeting that he planned to suggest postponing any decision until another special called meeting on May 30.

“We have a long way to go,” Stair said at the end of the meeting. Mayor Madeline Rogero added, “I don’t think there is any signal given tonight that we’re trying to rush this.” She had also announced at the beginning of the long, special called meeting her wishes to postpone a decision.

Green went line by line on Items One to Nine following a long discussion about the procedure to hold the meeting. Stair said the proposed zoning map “gives me heartburn.” That map, being changed again, should be available by the next meeting.

Rogero said that the council could consider draft changes and several were approved that day including some language corrections suggested by council attorney Rob Frost, who questioned terms and punctuation. Everything approved is tentative and will go into an amended Recode final presentation.

Councilmembers George Wallace, Andrew Roberto and Lauren Rider spoke the most often with questions or suggestions to the changes proposed in the fifth draft of Recode.

Among those changes to the final Recode, an effort that Green described as “a huge effort by a limited number of people, staff, the law department, the planners and the public,” were striking “commercial” from home occupation descriptions. Rider suggested changing “shall and must” to “may” in the animal boarding portion about the number of pets.  It was also suggested to permit taller buildings within a commercial and industrial zone and changing the RN-2 zone for duplex homes from the proposed 10,000 square feet back to 7,500 square feet, the current size.

Green said that the Recode effort can be “revisited from time to time” and the mayor described it as “a living document.” City attorney Charles Swanson said that occupancy standards for residential has been deleted from the proposal. Green said he would consider adding an additional residential zone if the council wishes.

The council also discussed permitting restaurants in office parks and changing the structural requirements for new buildings that are next to homes. Green promised that one of those changes, not discussed by the planning commission, will go back before that body after Recode is adopted.

That adoption could come as late as June or July.

The hillside protection policy was also discussed and may eventually also apply to commercial developments and not just residential areas. Both Roberto and Stephanie Welch said their districts want the protection extended to all districts.

Requiring permanent restrooms for Food Truck Parks was debated. Currently the city has only one authorized park where food trucks may gather and it seems to be the opinion of council that portable toilets should be permitted since there’s no permanent structure at that site.

By hour five several council members said they were tired and getting confused. Mayor Rogero suggested they complete Article 9 except for the zoning map.

“I feel we’re running out of steam,” Rogero said.

The May 30 meeting probably won’t see a final decision as talks continue. The mayor said the public has ample time to respond before a vote.

What’s left to be discussed?

Also a rehash of changes approved or discussed may all come up as well as a discussion on the new zoning map which rezones or renames the zones for every property in Knoxville.

A final vote could come four to five weeks after the May 30th meeting.