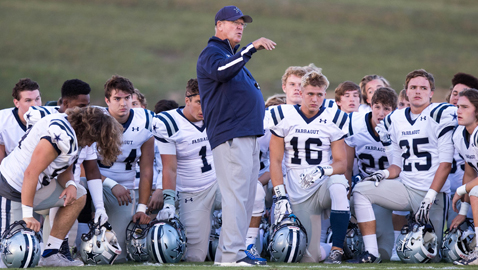 A star for a long time has been the symbol of Farragut High football, just like good character is often mentioned when talking about Eddie Courtney, the Admirals’ veteran coach. So it’s fitting the first-ever East Tennessee CAREacter Star Head Coach of the Year Award will go to Courtney.

Dave Moore, founder of the CAREacter Star Athlete and CARE 365 programs, released information last week on the inaugural East Tennessee awards that are going to be presented to Courtney and four others in three additional categories.

“Coach Courtney is one of the greatest men I know,” said Farragut Athletic Director Donald Dodgen. “He is a great teacher and a great coach. His character is of the highest standard. Anyone you talk with in the state of Tennessee says great things about Eddie.”

Courtney guided Farragut to the TSSAA Class 5A state championship last fall with a 45-35 win over Independence that saw the Admirals come back from a 28-point deficit.

“Coach Courtney’s award is based on his character, not for the state title,” said Moore. “Coming back like they did is character.”

Gregg Bostick of Grace Christian Academy and Alcoa High’s Peggy Bratt are the CAREacter Star Support Persons of the Year.

Winston Russell of Oak Ridge High is the Assistant Football Coach of the Year and Clinton’s Ken Buchanan of the Clinch Valley Football Officials Association was selected the Referee of the Year.

The awards were voted on by head football coaches and officials from Kingsport to Sweetwater, said Moore, plus some members (board of directors) of the CARE team and athletic directors.

The honorees will be presented plaques at home games during the upcoming season along with other prizes, said Moore, who wants to present similar awards in basketball, baseball and softball next school year.

Bostick has volunteered to be Director of Football Operations at GCA the past three seasons.

“Gregg is a tireless worker that does so much for the Grace football program,” said Rusty Bradley, the Rams’ new head coach. “The amount of work he takes on is unbelievable and will definitely make my job a lot easier. He is involved for the right reasons; he loves the school and he loves the kids.”

“She means as much to our staff and is as valuable as any coach,” said Alcoa Head Coach Gary Rankin.

“What strikes me most about Winston is the rapport he develops with the players he coaches,” said Gaddis. “He takes a special interest in every player and the players obviously feel it. He is a great role model for every player around him.”

After his many years of teaching and coaching, a phrase that’s frequently heard around Robertsville and Oak Ridge is: “Coach Russell has to be the coolest old person alive.”

Oak Ridge Athletic Director Mike Mullins adds: “Coach Russell’s longevity is a testament to his commitment to the profession and is a rarity these days.”

Buchanan will be going into his 38th year with the Clinch Valley Officials Association and his seventh season as supervisor.

“Ken heads up getting all the officials every year at the end of the season for the CAREacter Star Community Service Games at Grace,” said Moore. “He and all the officials do these games every year for free to help out whatever cause we are having to raise money for, either an injured player or a child with a life-threatening illness.”