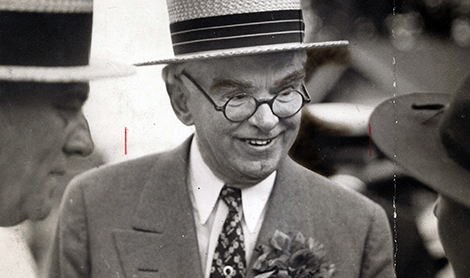 Edward H. Crump, undisputed leader of the Shelby County machine and congressman from Tennessee’s Tenth District, was the primary focus during an especially bitter battle for the Democratic gubernatorial nomination in 1932. Former governor Malcolm Patterson, a highly tarnished figure and seventy-one years old, had the support of the administration of Governor Henry Horton, who might have been one of the few figures in the state even less well regarded than Patterson. Horton had presided over the loss of virtually all of the state’s money, which he had invested with Rogers Caldwell, business partner of Horton’s mentor Luke Lea. Lea was also the owner and publisher of the Nashville Tennessean, which was avidly pushing Patterson’s candidacy and battering Crump daily in the pages of the newspapers. The attacks by candidates and the Tennessean caused friends of Crump to purchase ads in Tennessee newspapers asking “Who Is This Ed Crump, Anyway?” Those same friends, who praised Crump for his public service and reiterated the positives of his long record, supplied the answers.

Crump was still smoldering about the charges leveled by Idaho U. S. senator William E. Borah, who accused the Shelby County machine of trading Red Cross flour for votes from needy citizens. Borah made his accusations without any real proof and Crump issued a public challenge, offering $10,000 for actual proof the machine had done any such thing. Writing a letter to Senator Borah, Congressman Crump wrote, “I will place in the hands of a committee of 15 citizens of the city of Memphis, or of Boise, Idaho if you will bring them here, representative of the religious, professional, farming, business and laboring classes, a certified check for $10,000 (the equivalent of 15,000 24-pound bags of flour) to be devoted to public charity, if after a most searching investigation, the committee will state that I, or any of my political friends, have at any time, controlled, or even sought to control, the distribution of farm board flour among the recipients of public charity, for political purposes or otherwise.”

Congressman Crump also insisted $11,500,000 in federal relief money not be distributed in Tennessee until “a fair and impartial, non-partisan board” was named to allocate the money in the Volunteer State. Crump also was critical of the relief board appointed by Governor Henry Horton, which was to oversee the allocation of the funds. Crump insisted “the Reconstruction Finance corporation will never sign a check for one dollar for Tennessee until it is clearly understood and assured that the money is to be used fairly and squarely, without respect to political affiliations.” Almost instantly the “Loyal Tennesseans’ League” bought huge newspaper advertisements accusing Crump and gubernatorial candidate Hill McAlister of “Playing Politics With Human Misery.” The charge was made on the basis of Congressman Crump’s refusal to acquiesce to having Governor Henry Horton appoint the relief apparatus in Tennessee. There certainly was enough distress to go around in Tennessee during the depths of the Great Depression. It was certainly a fact thousands of Tennessee families were suffering acutely due to the Depression.

McAlister’s opponents in the Democratic primary, joined by the Nashville Tennessean, continued to hammer at the Shelby County machine and that of Mayor Hilary Howse in Nashville, for allowing African-Americans to vote. Speaking in Union City, Tennessee, former governor Malcolm Patterson dared Hill McAlister to write a public letter to Crump insisting that blacks would not be allowed to vote in the Democratic primary. “All the candidates for governor make the statement that the voting of negroes should not occur in a Democratic primary,” Patterson thundered. “The state executive committee has gone on record as declaring that if they are voted that this would be taken as evidence of fraud, and the returns in the wards and precincts where this occurred will be thrown out and not considered in the election. It is well known that the Democrats of Tennessee are almost unanimous in the belief that negro voting in Democratic primaries is not only illegal but in contravention of all their sense of fair play and political morals.”

Malcolm Patterson seemed aghast at the very idea, telling his audience, “I was never a candidate in any primary in my life where negroes were voted.” Patterson reminded his listeners even before becoming a candidate for governor “I opposed negro voting in Democratic primaries and both spoke and wrote against this reprehensible practice.” The high-minded Patterson then made an incredulous statement, saying, “I am a far better friend to the negroes than are the men who use and vote them for the purpose of corrupting our elections and then cast them aside.” Patterson graciously added, “I do not blame the negroes so much as those who take advantage of their ignorance.” If anything, the third candidate for the gubernatorial nomination, Lewis Pope, was even more blatantly racist. Patterson, a resident of Shelby County, knew very well the Crump machine extended services to African-American residents, including hospitals, parks, and the like. The machine also employed some African-American citizens, which was not true anywhere else in the South.

The Patterson campaign also offered “prizes” to those who took photographs of African-American voters being “herded” to vote in Shelby County, including a $100 prize for “the best collection of pictures of Crump negro herding…” Joe Hatcher, the political columnist for the Nashville Tennessean, was already squalling about massive voter fraud in Shelby County before the ballots were counted. Hatcher wrote that Malcolm Patterson returned to Memphis to a hero’s welcome of 10,000 cheering people, which constituted the largest demonstration of anti-Crump sentiment in Shelby County’s history. Hatcher claimed the former governor “was the master orator of the campaign” and gave the “greatest address of the campaign” when speaking in Memphis the night before the election. It was all for naught.

One Memphis poll worker claimed Congressman Crump had been ejected from a polling place. William G. Hall claimed he had forced Crump to leave the polling place for the 29th ward, telling the Memphis Boss, “Nobody has a right inside the polls except officials, watchers and those who are voting.” When quizzed by a reporter, Crump said as a candidate for Congress he toured numerous polling places across Shelby County. “Nobody put me out,” Crump snorted. “In fact, there was no argument. Hall said something to me about being in the voting booth, and I informed him that I was paying a call on my friends there, as I had a perfect right to do. When I had shaken hands around, I left. That’s all there was to it.”

Congressman Crump faced an opponent in the Democratic primary, but won 34,532 votes to T. B. Collier’s 6,699 votes.

The Loyal Tennesseans’ League, which was merely an extension of the Patterson campaign immediately declared Lewis S. Pope was in fact the legal nominee of Tennessee’s Democratic Party. Pope’s campaign manager, Sam Carmack, announced, “Mr. Pope considers himself the nominee of the white democracy of Tennessee.” The Pope campaign complained Hill McAlister had won the nomination on the basis of having carried both Davidson and Shelby counties overwhelmingly and once again raised the issue of race. Claiming that McAlister’s victories in Shelby and Davidson counties was the result of black voters having been “herded to the polls”, as well as the fact some 165,000 Tennessee Democrats had voted for other candidates than Hill McAlister, the Pope campaign came to the conclusion their candidate was the legitimate nominee of Tennessee’s Democratic Party. Pope made clear the racial nature of the dispute, saying, “I would have accepted the vote of Representative E. H. Crump, but not the votes of Crump and his negroes.” Pope continued to fan the flames of racial discord, comparing the practices of the urban counties to those of the rural counties where he received his greatest support. Pope made a fiery denunciation of both Ed Crump and Hilary Howse shouting it was damnable that the machines had nullified the votes of “white Democrats of rural Tennessee” by “mass voting of negroes who never claimed to be Democrats.” Lewis Pope defiantly demanded Hill McAlister join him in a run-off election. The stage was being set by Crump opponents for Lewis Pope to run as an Independent in the fall election.

The anti-Crump press, led by the Tennessean, delighted in inflammatory headlines like that appearing in the August 24, 1932 edition of the Tennessean blaring “Howse – Crump Clique Shivers at Attempted Bribery Charges.” Crump ignored the press and was pleased when the Tennessee State Democratic Executive Committee certified Hill McAlister as the nominee for governor. The committee also swatted down a protest made by Tom Collier, who had opposed Congressman Crump in the Democratic primary, who insisted Crump’s nomination for Congress be set aside.

Lewis Pope made official what everyone presumed was going to happen on September 10, 1932; he would run in the general election as an Independent Democrat. Pope, speaking in Lebanon, Tennessee, said his candidacy would eliminate “Crump Democracy” in Tennessee. Congressman Crump dismissed Pope as “Luke Lea’s bolting candidate for governor” and said the challenger had but one goal, “the vain hope not of being elected himself, but of defeating McAlister.” In short, Crump accused Lewis Pope of running to throw the election to the Republican candidate. “Tom Henderson, chairman of the state primary board, a friend of the Horton administration, a personal friend of Luke Lea, and a staunch supporter of Judge Patterson, heard all of the 12 hours of testimony and voted against Pope and in favor of McAlister as the rightful nominee for governor,” Crump pointed out. It was clear, Crump insisted, Hill McAlister had been “fairly and squarely elected.” Crump ridiculed Pope as the “whimpering Bledsoe county baby” and charged there had indeed been election fraud during the Democratic primary, but insisted it was on the part of Pope’s own supporters. Crump said affidavits from Bledsoe County, as well as other Pope strongholds, would show negroes had indeed voted for Pope “with and without poll taxes.” Crump said those affidavits would also show “that thousands of lifelong Republicans were voted for Pope”; the Memphis Boss also said that “hundreds of ballots were marked outside of polling places by Pope workers and that ‘hundreds and hundreds were voted without poll taxes.’” Congressman Crump also sneered at the notion, repeatedly endlessly by Pope during the gubernatorial primary, that he was opposed by big banks and utility companies. Crump said Pope Shepherd of Chattanooga, Pope’s “kinsman and leading counsel in his contest case” was the representative of “a widely known power company.” Whether one believed Lewis Pope or E. H. Crump, the truth was the gubernatorial primary had been bitterly and fiercely fought and both sides had likely committed election fraud on behalf of their own candidates.

Despite being remarkably thin-skinned, E. H. Crump was well able to hold his own in any political brawl. Crump had his eyes squarely focused on the future and the general election of 1932.