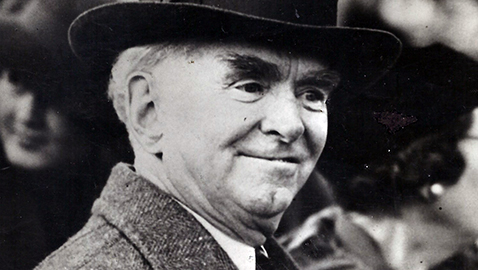 Edward Hull Crump, leader of the Shelby County political machine and congressman from Tennessee’s Tenth District, had been a strong and early supporter of New York governor Franklin D. Roosevelt for the Democratic presidential nomination in 1932. Crump was one of several prominent Tennesseans who worked hard for Roosevelt’s nomination, including senators Kenneth D. McKellar and Cordell Hull. The Tennessee delegation to the 1932 Democratic National Convention loyally and enthusiastically backed Roosevelt on every ballot. Later, inside the White House, the most important supporters were those who had backed the President before the convention. E. H. Crump had been one of those early supporters and had supervised the formation of a Roosevelt for president club in Shelby County. Historian G. Wayne Dowdy, who has written much about Crump’s correspondence, records the Memphis Boss sending a letter to Roosevelt’s secretary seeking information on the governor’s accomplishments. Crump informed the secretary it was his intention to “perfect an organization for Governor Roosevelt for president.” It took the normally efficient Louis Howe six weeks to respond to Crump’s letter. Howe sent along a book, which was a recent biography of Roosevelt published for the campaign. Clearly annoyed, Crump waited six weeks before sending another letter. “Was there any good reason why it should have taken you more than one month to reply to what I thought was a very courteous letter based on my sincere interest in Governor Roosevelt?” Crump wanted to know. That frank communication brought a direct reply from Franklin Roosevelt, who invited the Memphis Boss to come to New York for a personal visit. Crump was unimpressed and replied, “I am going along for you, inasmuch as I started out that way. However, I must be perfectly frank in saying that, in the light of the gratuitous treatment I received, I just cannot accept your invitation.” From Crump’s perspective, he was not merely some petty politician, but headed the powerful Shelby County machine as well as a sitting member of Congress. Crump had no intention of being taken for granted, nor would he stand for being treated condescendingly. Finally realizing he and his staff had offended the Memphis congressman, Franklin Roosevelt fired off another letter reassuring Crump he very much wanted his support. “I am indeed grateful to you for all that you have done. I should much like to have a good talk with you before you go to Chicago,” Roosevelt wrote in anticipation of the Democratic National Convention. “Can you not run up to see me either in Albany or in Hyde Park…? There are many things I should like to talk over with you.” Congressman Crump agreed, replying, “I will endeavor to see you before the Chicago Convention at your Hyde Park home.” Along with McKellar and Hull, E. H. Crump played a crucial role in winning Franklin Roosevelt the Democratic nomination for president. Yet it would have been quite unlike the Memphis Boss to forget the casual treatment he had received from FDR and Roosevelt’s staff. As the Democrats began the fall campaign against President Herbert Hoover, Crump asked Roosevelt to make a campaign stop in Memphis. After considerable speculation in the news media, Roosevelt finally told Crump it would not be possible for him to make an appearance in Memphis. That did nothing to make Crump feel more warmly toward Roosevelt and the Memphis Boss had not forgotten it when he joined the other members of the Tennessee Congressional delegation visiting the newly elected president at the White House. Crump recorded what happened in a letter to his second-in-command, Frank “Roxie” Rice. Evidently Roosevelt teased Crump, saying his “presence reminded him of his campaigning days before the November election when I was terribly provoked because he did not make a trip through Tennessee as I wished. I promptly replied ‘have you any censure for what I did for you in Chicago?’ With a smile he said ‘no’ and after further referring to me as a good Tammany Hall Tennessean he added that I usually got results.”

Crump intended to get results in Tennessee for the general election. Having repaired his personal and political relations with Tennessee’s senior United States senator, K. D. McKellar, Crump backed former State Treasurer Hill McAlister for the Democratic nomination for governor. McAlister had been strongly supported by Senator McKellar and Crump had delivered a tremendous majority for the candidate in Shelby County. Both of McAlister’s opponents for the nomination, former governor Malcolm Patterson and Lewis Pope, had injected race into the campaign, complaining about Crump’s machine and that of Nashville Mayor Hilary Howse “herding” black voters to the polls. Pope had run very strongly in many of Tennessee’s rural counties and McAlister had won the nomination largely in the urban counties. Lewis Pope claimed he was the rightful nominee after the votes of African-Americans was subtracted from McAlister’s vote totals. When Hill McAlister was legally certified as the Democratic nominee for governor, Pope refused to accept the verdict of the state executive committee and launched an Independent campaign for the governorship in the general election.

Crump was himself a candidate for a second term in the House of Representatives and he and his political organization worked hard for Hill McAlister in the general election. The Shelby County machine also avidly supported the candidacy of Franklin Roosevelt. E. H. Crump had become an issue during the Democratic primary and the Memphis Boss was the whipping boy of both the Patterson and Pope campaigns. Lewis Pope, who had run less than 10,000 votes behind Hill McAlister in the primary, saw no reason to change tactics. Pope insisted he was the true Democratic nominee in the general election as only a “conspiracy” between Crump and Mayor Howse of Nashville had kept him from winning the primary.

With tens of thousands of Tennesseans suffering from the Great Depression, there was genuine enthusiasm for Franklin Roosevelt. Crump joined Senators McKellar and Hull in campaigning for the Democratic ticket. Lewis Pope’s Independent campaign fell short and he ran third behind McAlister and Republican John B. McCall. A few weeks after the general election Crump held a telephone conference with governor-elect McAlister before leaving for Washington, D. C. As Crump prepared to leave for the Capitol, he announced his support for fellow Tennessee congressman Joseph W. Byrns to succeed Speaker of the House John Nance Garner, who had been elected Vice President with Franklin Roosevelt.

Hill McAlister had not even taken the oath of office before “Roxie” Rice was denying there had been a break between Congressman Crump and the governor-elect. The Nashville Tennessean tried to create friction between Senator McKellar and Congressman Crump over McKellar’s candidacy to become Democratic National Committeeman for Tennessee. A reporter asked Crump if he would back Mitchell Long of Knoxville for the post. “Is Long a candidate?” Crump asked. McKellar acknowledged he had received support all across the state following the death of former governor Benton McMillin. “Since that time, I have received letters and telegrams from a majority of the state committee saying they wished to vote for me,” McKellar said. The Tennessean charged Crump was supporting Long after having publicly complained about the senator naming his brother Postmaster of Memphis. Clint McKellar had been assistant postmaster for years and the senator felt his brother deserved the promotion and insisted the family connection should not impede Clint’s well-deserved advancement.

Irrespective of Crump’s support, McKellar was named Democratic National Committeeman. Crump used his office to press the Attorney General to prosecute Luke Lea. Crump complained about “the delay and dillydallying which has characterized the handling of the government’s prosecution of Luke Lea.” Lea, owner and publisher of the Tennessean, had been indicted by a federal grand jury for having violated banking laws. Much to Crump’s displeasure, in spite of having been indicted, the former senator’s case had yet to go to trial.

With President Roosevelt’s selection of Cordell Hull to serve as Secretary of State, Governor McAlister was immediately faced with the decision of appointing a senator to serve until a special election could be held in 1934. Congressman Crump immediately said he had no interest in the appointment or attempting to influence the appointment. “The appointment is entirely up to Governor McAlister, and I am not making any recommendation,” Crump said. When asked if he would accept an appointment to the United States Senate, the Memphis Boss replied, “We have one senator from West Tennessee now, and under the custom that has been followed, there can be but one appointment from the same grand division of the state. The appointment will necessarily come from Middle or East Tennessee.” Crump was, of course, correct and Governor McAlister quickly named Nathan L. Bachman to Hull’s vacant Senate seat.

While Crump exercised little influence in Congress, his organizational genius was readily apparent when the House of Representatives elected a new Speaker to succeed John N. Garner. Henry T. Rainey of Illinois was the ultimate victor while Tennessean Joseph W. Byrns beat William Bankhead of Alabama by a single vote to become the new Majority Leader. Evidently it was Crump who masterminded a combine that elected both Rainey and Byrns.

With the Republican administration of Herbert Hoover gone, E. H. Crump became a reliable vote in Congress for FDR’s New Deal. Yet Crump was considerably embarrassed when a grand jury in Shelby County returned indictments against three former officials, including A. P. “Tony” Walsh, who had resigned as Commissioner of Finance December 31, 1932. J. H. “Jack” Hessen had been the City Treasurer of Memphis until his position had been eliminated, likely at Crump’s direction. The third indictment involved M. D. Sabin, a bookkeeper in the Memphis city engineering department, who stood accused of embezzling $6,000. Congressman Crump made a hurried trip back home to Memphis, not because of the indictments, but to visit with his ninety year-old mother and sons. Accompanied by Mrs. Crump, the Memphis Boss intended to return to Washington, D. C. before Congress adjourned in time to sail for Europe in June. Remaining in Memphis for a mere twenty-four hours, Congressman Crump returned to the Capitol by airplane.

Crump remained much interested in patronage matters in Tennessee, although perhaps not to the extent that Senator McKellar was and there was likely some jealousy on the part of the Congressman. McKellar was the chief dispenser of patronage in Tennessee through the New Deal. Secretary of State Cordell Hull, while denying any interest in political patronage in his home state, did indeed have a voice in killing the candidacies of several prominent Tennesseans. Lonnie Ormes, who had once served as Senator K. D. McKellar’s secretary, coveted the U. S. Marshal’s post for Middle Tennessee, but was opposed by Hull. Ormes had also been McKellar’s campaign manager in his first race for the United States Senate. Congressman Crump lined up behind Ormes and the Secretary of State was urged to withdraw his opposition to Ormes. While Senator McKellar was not keen upon appointing anyone personally objectionable to Hull, he did eventually appoint Ormes to the post, although it took several years for the Secretary of State to drop his objection.

Politics and patronage were less on Crump’s mind as he and Mrs. Crump toured much of Europe during the summer of 1933. The Tennessean observed it “would take a Dutch lawyer to follow their movements but they have seemed recently to be dividing their time between Germany and Switzerland…” Crump’s interests were watched over by “Roxie” Rice in Shelby County, while his efficient secretary, Marvin Pope, watched after the Congressman’s Washington office.

As E. H. Crump enjoyed his sojourn in Europe, his enemies made the most of peddling gossip the Memphis Boss would do his best to unseat Senator McKellar in 1934. Crump paid them no mind at all.