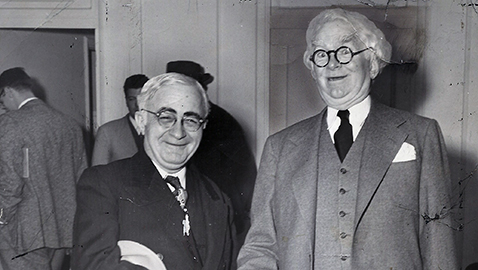 After Congress had adjourned in 1933, Edward Hull Crump, congressman from Tennessee’s Tenth District, took his wife on a three-month tour of Europe. The Crumps returned on September 26, 1933 and the Congressman stopped off in his Washington office to clear off his desk. Crump had a talk with James A. Farley, the New Deal official who served as Franklin Roosevelt’s Postmaster General, as well as Chairman of the Democratic National Committee. Farley was the primary dispenser of patronage in the Roosevelt administration. While Crump stopped in Washington, D. C. after their ship pulled into port in New York, Mrs. Crump headed for Chicago. Congressman Crump intended to head that way himself and join his wife to visit the World’s Fair.

When Congressman Crump returned to Memphis he was sought out by the press to discuss his European tour. Oddly, Crump had kind words for Benito Mussolini whom he described as “the wonder of the age.” Crump noted German Chancellor Adolf Hitler was “copying many of Mussolini’s policies” and it was his opinion Italy and France were “the best fixed countries in Europe.” When asked about how good it was to be home, the Memphis Boss replied the best thing was the dinner he had enjoyed at his mother’s home in Holly Springs, Mississippi, which consisted of “butterbeans, okra, and milk.”

Personal relations between Tennessee’s senior United States senator, Kenneth D. McKellar, and Congressman Crump were again at a low point. Crump, used to ruling in Memphis and Shelby County, found Congress to be an entirely different experience. Crump was merely yet another congressman while McKellar was one of the more senior members of the United States Senate. McKellar commanded real respect and power in Washington, D. C., something that continued to elude Ed Crump. Doubtless, there was some jealousy on the part of Crump and the Nashville Tennessean insisted the Memphis Boss wanted to defeat McKellar in 1934. Joe Hatcher, political reporter for the Tennessean, wrote “…all the howling and denials in the world to the contrary notwithstanding…” that “Boss Ed wants to beat McKellar.” Hatcher opined Crump might very well lend his support to Congressman Gordon Browning who was contemplating running against Senator McKellar in the Democratic primary in 1934. Hatcher confidently predicted “Browning is the one man in Tennessee that is considered with any sort of a chance to take the Memphis veteran, whose Memphis strength will forget he ever lived down there if the ‘Boss so orders.” The true extent of the alienation existing between Crump and McKellar was hard to gauge. Certainly the Senator had been irritated when Crump had rapped his selection of his brother Clint to serve as the Postmaster of Memphis. McKellar had insisted upon the appointment, pointing out his brother had served as the assistant postmaster for almost twenty years and did not believe Clint should be deprived of a well-deserved promotion merely because he was related to the senator. McKellar also persisted with other appointments that did not meet with Crump’s approval and in every instance, the senator had his way, which likely added to the Memphis Boss’s resentment. Those appointments included nominating his former secretary William McClanahan to serve as U. S. Marshal for the Western District of Tennessee and Bert Bates as U. S Marshal for the same district. The Bates appointment was especially galling to Crump.

Days later Joe Hatcher was reporting the results of Senator McKellar’s “flying visit” to Tennessee. Apparently, Hatcher believed McKellar’s tour had been thoroughly successful as he reported opposition to the senator’s 1934 reelection had all but collapsed. The McKellar visit had “reverberations in political circles from Shelby to the Capitol…” While in Tennessee McKellar held numerous conferences and accepted pledges of support from Tennesseans. Word quickly filtered back to those who might have been opposed to McKellar and Hatcher wistfully concluded “Congressman Gordon Browning had just about abandoned the idea of taking the field against” the senator. While Hatcher remained convinced Gordon Browning was the only potential candidate with the wherewithal to defeat McKellar for renomination, the Congressman later related he could not secure a single promise of support from any prominent Tennessean should he run against the senator. Clearly, Hatcher was engaging in wishful thinking. Yet Hatcher speculated it was Crump who had determined McKellar could not be beaten. Hatcher wrote “we believe that Boss Ed Crump himself foresees no possibility of defeating the man who has become his arch enemy – – – politically speaking.” Joe Hatcher felt McKellar’s influence was such the senator “no longer needs the Crumpian support.” Hatcher thought even if McKellar lost in Crump’s domain of Shelby County, a fight against the senator by Crump “would mean 50,000 votes for McKellar in West and Middle Tennessee at least.”

Ed Crump was usually a highly practical man and no matter the differences between he and McKellar, the Memphis Boss was likely quite well aware of the senator’s strength in the rest of the state. As a member of Congress, Crump certainly knew of McKellar’s influence inside the Senate and ability to produce projects and appointments for Tennessee and Tennesseans. Joe Hatcher was doubtless correct in his assessment Crump put a halt to those hoping to defeat K. D. McKellar in 1934.

Senator McKellar’s influence was demonstrated yet again, albeit in a small way, when he and Nathan Bachman approved the selection of Thomas H. Allen as the state engineer for the Public Works Administration in Tennessee. Allen, a former fire and police commissioner from Shelby County, was also a professional engineer and well regarded in West Tennessee. The choice was acceptable to Congressman Crump who had sent both Memphis Mayor Watkins Overton and County Commissioner E. W. Hale to Washington earlier in anticipation of the vacancy. It may well have also been a subtle reminder the Shelby County machine was making its peace with Senator McKellar.

Crump and his wife left Washington, D. C. in December to return to Memphis in time to celebrate Christmas with their sons. The Congressman announced he would return to Washington after the first of the year, but there were signs Crump was tiring of the Capitol. Crump had plenty of time to reflect, especially as he was suffering from a bad cold. “It’s always bad to brag,” Crump said, “and especially if you can’t back it up. I’ve been bragging that I haven’t had a cold for 30 years, and here I am with a bad one.” Crump’s cold likely didn’t lessen his happiness when his youngest son, John married Miss Jane Boyce at St. John’s Episcopal Church in Memphis on Christmas Day.

Congressman Crump left his family in Memphis and returned to Washington and when asked about his plans, replied he had only one: to support President Franklin Roosevelt. Crump, unlike several of his colleagues, served on no important House committees. Crump’s committee assignments were Flood Control, Rivers and Harbors, and the Census. As ever, Crump remained outspoken, especially on those topics that interested him. Crump gave out an interview and said Tennesseans would eventually receive “the cheaper lights, cheaper telephones, cheaper street car fares and cheaper water rates” they hoped for sooner rather than later. “All utilities,” Crump said, “will eventually see that they can earn more on reducing their rates and doubling their business.” A successful businessman himself, Crump opined, “City people and farmers will eventually get dirt-cheap lights and the time is not far off when there will be an electric light in every farm house, barn, red apple tree and chicken coop throughout the Tennessee valley.”

In Memphis, Crump was honored when the Board of Education named a new football stadium for him; originally the stadium was intended to seat 7,500 people, but was expanded to seat an additional 12,500 people. Crump regularly attended high school football games in Memphis and had sought funding for the stadium.

On March 3, 1934, almost three years to the day he had first taken the oath of office as a member of the U. S. House of Representatives, E. H. Crump announced he would not run again. “With a business in Memphis, an office in Washington, a thousand miles apart, I must choose between the two,” Crump explained. “This being the situation, I prefer my business, with my boys, at home.” Asked if his retirement from Congress was also giving up politics, Crump replied emphatically, “Absolutely, no.” Crump’s pronouncement came as a surprise, especially to his colleagues inside the Tennessee Congressional delegation. Obviously, Crump could have remained in Congress for the rest of his life had he wished to do so, but the Memphis Boss was weary of the traveling, nor did he especially enjoy life in the Capitol. Eager reporters pressed Crump for information on who might succeed him, but the Boss refused to discuss it. Crump did, however, thank the people of Shelby County for their support and confidence and allowing him to have the opportunity to serve them in Congress.

Crump’s silence on the topic did not keep the news media from speculating as to his successor in Congress. The speculation ended when Walter Chandler, city attorney for Memphis, announced his own candidacy. Clearly, Chandler never would have declared for Congress had Crump disapproved of the notion. Days later Crump had to leave Washington following the death of his mother-in-law, Mrs. Carrie M. McClean, to attend the funeral.

Joe Hatcher’s obsession with the state of Crump’s relationship with McKellar caused him to run afoul of the senator. Hatcher had reported McKellar’s “’tantrums’ when the praise of Congressman Ed Crump has been voiced in his presence in recent months.” McKellar angrily denied it, telling Hatcher, “This statement is unqualifiedly false. It is not true now and never was the truth.” Hatcher wrote that McKellar had demanded an apology if the writer considered himself to be a gentleman. After receiving Senator McKellar’s wire, Hatcher confessed it was “evident” his “informant was mistaken and misquoted the Senator.”

Crump, who was most certainly aware of the rumors, announced his support of Kenneth McKellar’s reelection campaign on April 28, 1934. “Senator McKellar is one of the outstanding figures in Congress,” Crump said. “Excelled by none in character and manhood, Senator McKellar has been progressive, energetic and a statesman of wide vision and conspicuous ability.” Crump added McKellar “loves Tennessee because he loves Tennesseans and it is his great pleasure to serve them.” The Memphis Boss, perhaps to finally kill off the rumors, ladled on more praise. “The story of his whole political life reveals a rich and fascinating personality, indomitable courage, and unswerving devotion to the interest of the people, and no man is better qualified to assist the President in a new deal, which gives the people a better break.

“If there is any merit in distinguished service, Senator McKellar should be returned to the Senate for another six years and, while I do not claim to be as wise as Solomon and as smart as the devil, he will be.”

Another sign of unity between Crump and McKellar came in June when the two endorsed the reelection of junior senator Nathan L. Bachman who was opposed by Congressman Gordon Browning. McKellar bluntly said, “I shall vote for and support Senator Bachman and Governor McAlister.” “I join Senator McKellar and indorse his statement, asking for the election of Senator Nathan Bachman to fill out the unexpired term of former Senator Cordell Hull…,” Crump said. “We have worked up a splendid organization in Shelby county for Senator McKellar’s and Governor McAlister’s re-election and we are now including Senator Bachman.”

McKellar and Crump would eventually become closer than ever and dominate Tennessee’s politics until 1948.