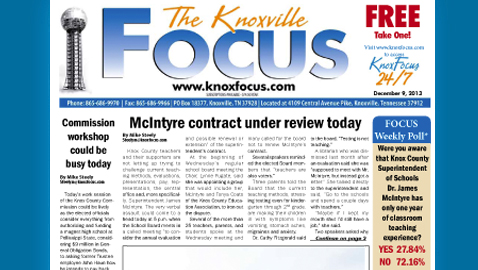 Knox County teachers and their supporters are not letting up trying to challenge current teaching methods, evaluations, presentations, pay, representation, the central office and, more specifically, Superintendent James McIntyre. The very verbal assault could come to a head today at 5 p.m. when the School Board meets in a called meeting “to consider the annual evaluation and possible renewal or extension” of the superintendent’s contract.

At the beginning of Wednesday’s regular school board meeting the Chair, Lynne Fugate, said she was appointing a group that would include her, McIntyre and Tonya Coats of the Knox County Education Association, to iron out the dispute.

Several of the more than 25 teachers, parents, and students spoke at the Wednesday meeting and many called for the board not to renew McIntyre’s contract.

Several speakers reminded the elected Board members that “teachers are also voters.”

Three parents told the Board that the current teaching methods, stressing testing even for kindergarten through 2nd grade, are making their children ill with symptoms like vomiting, stomach aches, migraines and anxiety.

Dr. Cathy Fitzgerald said to the board, “Testing is not teaching.”

A librarian who was dismissed last month after an evaluation said she was “supposed to meet with Mr. McIntyre, but instead got a letter.” She talked directly to the superintendent and said, “Go to the schools and spend a couple days with teachers.”

“Maybe if I kept my mouth shut I’d still have a job,” she said.

Two speakers asked why a news story about the conflict was pulled from television news  broadcast and another said McIntyre “had the story pulled.”

Dr. Brenda Owensby said she was glad the Board was “finally listening” but only after the local media coverage” of the ongoing problems.

Ellen Davis presented each Board member with a “Letter of Concern” similar to those given teachers with low evaluations and demanded that testing not mandated by the state be stopped.

Regina Turner, a mother of a 4th grader, said her daughter used to “Love to learn” but now has changed and even gets migraine headaches.

“I’m angry with you, all of you, to have taken that (love) away from her,” she said.

Another parent said that the testing of K-2 students are against state mandates that forbid testing before the third grade.

Amber Rountree and others called for the board to have a teacher as a member, selected by teachers. Several speakers said McIntyre’s visits to schools were only  a photo opportunity and a publicity stunt.

Dr. McIntyre has served as superintendent since July of 2008 and has overseen major changes in the way teachers educate students, including some testing and evaluations of teachers not mandated by state requirements. He has faced increasing ire for the way he and the Central Office have dealt with teachers.

According to his current contract, the superintendent receives a salary of about $246,000 per year, plus incentives that include an $800 monthly car allowance, $1200 in retirement each month, and is paid for out-of area meetings, etc.

The contract says if the Board declines to renew his contract they must pay him for the remainder of the school year. They can dismiss him for neglect of duty, insubordination, inefficiency, incompetence, or unprofessional conduct. McIntyre can resign with a 90 day notice and would only receive his unpaid salary and benefits for those days.

McIntyre has said he wishes to remain and see the changes continued, but has said that some of the testing and evaluations are local and not mandated.

Tonight’s meeting will begin at 5 p.m. in the Boardroom on the first floor of the Andrew Johnson Building. The work session and Board meeting will be broadcast live on Comcast Cable Channel 10, AT&T U-verse Channel 99, and streamed live at www.knoxschools.org.