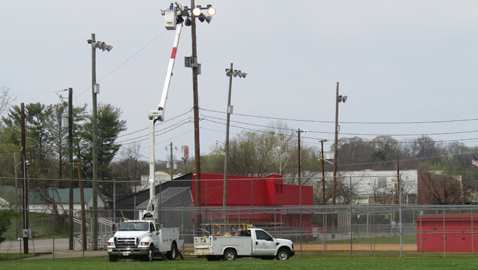 Dile Brown, who coached Little League baseball at Inskip-Norwood Park for 24 years until the mid-1990s, was glad to hear steps were being taken to restore the park and bring back the kids for fun and recreation.

There’s not been much going on lately at the old ball park, which is nestled between Clinton Highway and Central Avenue and just south of Merchants Drive.

“It’s been at least five or six years,” said Brown, estimating the inactivity at the park. “It started going downhill when they got away from Little League baseball in the early 1990s.”

Jared Coker, who once played on one of Brown’s teams – the Eagles – is president of the Central Youth Athletic Association, which has begun restoration of the park.

“We got all our ducks in a row the past year before we actually went in and made this a public deal,” said Coker, now 38. “We wanted to have our 501c3 (tax exempt status for non-profit organization) and a structured plan. We reengineered it like a 10-year type deal.

“We started out small and we’re looking for major backers now. The city and county are helping us a lot, but there’s just so much to be done, they just don’t have the time or funds to do it.

“The main thing we are looking for are people who want to make a difference in our community with us. And we’re going to support them too with advertisements for them, banners for them and recognize them all over social media.”

Changes can now be seen at the park when passing by on Inskip Road.

“We are starting by cleaning it up and have begun to paint the whole park Red and Black,” said Coker, a 1997 Central High graduate. “There will be some cool art work in weeks to come that’s going to be neat to let our Central Bobcat ‘Pride and Tradition’ show!”

Coker said the CYAA program eventually hopes to have football, baseball and softball at the park and soccer could possibly be added in the future.

“We are thankful for the many great partnerships we have with various groups and organizations who not only use City parks, but groups who are also devoted to improving spaces for all to enjoy, now and in the future,” said Aaron Browning, Deputy Director of Knoxville Parks & Recreation Department.

“We are excited to partner with Central Youth Athletic Association as they have a great vision to improve the Inskip-Norwood ball fields as well as develop youth through recreational sports.”

Football teams of the past that played out of I-N Park were the Inskip-Norwood Eagles. Now and in the future it will be the Central Bobcats. Both organizations have primarily been feeder programs for Central High School, so that hasn’t changed.

Jess Hodge, a longtime coach who also headed up the I-N recreation commission for years, didn’t seem to mind the name change when he heard of CYAA’s involvement,

“We know what we did in our time at Inskip-Norwood, and that won’t be forgotten,” said Hodge.

In its heyday, Inskip-Norwood Park had 12 Little League teams, said Brown, and once hosted the Little League state tournament, with the I-N all-stars taking second place.

Coker said some of the coaches in the Bobcats’ program played at Inskip-Norwood growing up.

“Our hope is to get the park back to having kids playing in it,” said Coker. “But we still want everyone who has ever played here or been a part of the park when it was home of the Inskip Eagles to know that there are (CYAA) coaches that played at Inskip in their youth – one being me personally, and we plan on having a wall decorated with some of the old team pictures from those days.”

In fact, Coker said pictures of former Inskip-Norwood teams were found inside the football building at the park when CYAA came in.

Coker has plans to turn the football building on the north end of the park into an indoor training facility for the CYAA program and other kids in the community. He said it would also house a board room and media room for watching game film and coaches’ training.

One of the issues to getting the park useable is fixing the water drainage, with some of the fields taking three to four days to dry, said Coker.

“We have an engineer working on what we can do to help that,” he added.

Coker said it’s going to take time to get the park back in shape.

“It’s not rundown to have to bulldoze it,” he said. “It just needs a lot of TLC.”

CYAA teams will continue to practice at the old Central High football field next to Gresham Middle School, said Coker. The Bobcats have been using the Inskip-Norwood facility for about five years, with some of its teams practicing there when additional field space has been needed in the preseason.

As for baseball and softball this season at I-N Park, some “travel teams” are renting field practice time through CYAA, said Coker.

For more information about helping restore Inskip-Norwood Park or to contact the CYAA organization, call Coker at 865-566-5144.