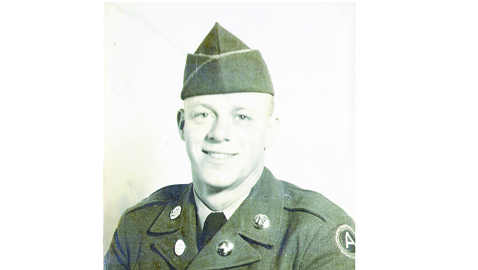 I lost my dad on March 5. I think of him every day. My eyes already are full of tears as I try to write this first paragraph.

He died peacefully at the Parkwest Hospital Senior Behavioral Health Center on a Saturday evening about 10:30. Dad had Alzheimer’s disease or a form of dementia and we were trying to get him some help, hoping maybe his medicine could be regulated to help his condition. A week or so earlier, however, his doctor said he had taken a turn for the worse.

I was at his bedside in the dimly lit room when I noticed his breathing appeared to be getting shallow. My brother John was just outside the open door on a phone call and I quickly motioned for him to come into the room. My two other brothers, Theo and Joe, had been there for most of the day, and Theo had only left about 30 minutes earlier.

John was on one side of Dad and I was on the other. We bent over close to him, kissed him and told him we loved him and would take care of Mom. A minute or so later, we called for a nurse to come in the room and she confirmed Dad had passed.

Dad really had become my best friend over the years in addition to being my father. Quite simply, he would do anything he could for his boys. He loved us all the same.

As I wrote in his obituary, he left behind the love of his life, Bobbie, who too has dementia but otherwise is doing good as can be expected for someone who turned 86 in April. Dad would have been 88 on May 27. They would have been married 65 years last Thursday, June 23.

The good folks at The Knoxville Focus had told me I could write a tribute column on my dad the week after he died. I tried, but my heart was too heavy.

We had the funeral in Clinton the following Thursday and Dad had a military burial service the day after in his hometown of Big Stone Gap in southwest Virginia, and was laid to rest next to his mom and dad.

The next week went by and then another. I finally told myself I would wait and do a Father’s Day column. Instead, last Monday, June 20, I reran the Father’s Day column I wrote on Dad in 2008 and the first year I started writing for The Focus. That column was mostly about my dad’s involvement in sports, his love for the Big Orange and how that had rubbed off on me.

But there was much more to my dad than just sports.

From the pictures I’ve seen and the tales I’ve heard, Bobby Williams the boy could have been one of “the Little Rascals.” My dad grew up in that era – the 1930s – and romped and played all over Appalachia, Big Stone Gap and East Stone Gap from daylight to dark.

After graduating from Big Stone Gap High School in 1947, Bobby soon followed in his dad’s footsteps and went to work for Southern Railway. My papaw was the railroad yardmaster in nearby Appalachia.

Dad was working as a railroad operator in, I think, Bulls Gap when he got “kicked” – a railroad term for being replaced by someone with more seniority – to Clinton. The story goes that Dad told the guy who kicked him that the first thing he was going to do when he got to Clinton was look up the guy’s girlfriend.

That turned out to be my mom, a very beautiful brunette, I must say, who was a telephone operator in Clinton. Dad was a handsome young man with light blonde hair and blue eyes. They made a great-looking couple.

Dad was in the United States Army when they got married in Alabama on June 23, 1951.

Dad would work 45 years for the Southern and Norfolk-Southern Railway, retiring as a dispatcher at the John Sevier yard in Knoxville in 1990. He also served 20 years and retired from the U.S. Army Reserves.

Dad was a longtime member of the Clinton Optimist Club and led the club to the No. 1 ranking in the state for outstanding community service when he was its president in 1978-79. He always was involved in the town’s youth sports – coaching and umpiring and was the last president of the Clinton Little League baseball program.

Dad also was a big supporter of the Clinton High Dragons and the last seven summers he and John would sell advertising for the football team’s poster that included the upcoming season schedule, with proceeds going to the football and band programs.

For his years of service to the community’s youth, the town of Clinton honored Dad by naming him a Grand Marshal of the 2012 Clinton Christmas Parade.

Even at his funeral, Clinton Mayor Scott Burton and former mayor “Wimp” Shoopman spoke highly of Dad’s years of service to the town’s youth.

Dad loved children. Even as his health declined, he carried with him a red eyeglass container that he filled with coins. And anytime he would see a youngster, he would offer the boy or girl a coin, usually a quarter. He got as much joy out of that as they did.

That was my dad.