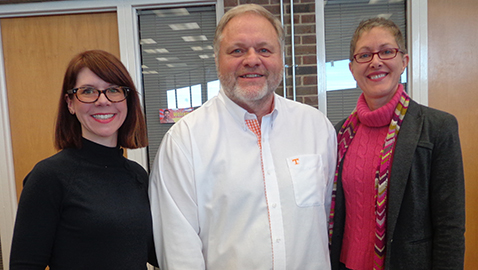 In a combined effort to get more residents of South Knoxville and South Knox County involved in the future of that area three local elected officials joined to meet the public recently.

The audience also heard from Debbi Sharp of the Office of Neighborhoods, who spoke of the contributions and efforts of various neighborhood associations.

“They are doing active and exciting things,” she said, listing several organized associations and their projects and plans.

Linda Rust, President of the South Haven Association, spoke on the Baker Creek Preserve Project and urged everyone to take part in an online questionnaire about the plans for the project.

Welch told the audience about plans for the Urban Wilderness and an idea to use the terminus of James White Parkway as a place to connect with the preserve. She said future plans could include not only a bike and walking trail connection there but possibly a restroom and dog park. She said the plans for the current end of the James White Parkway are “really cool and unique.”

Doug Bataille, Director of Knox County Parks and Recreation, spoke about various greenway and park plans in South Knox County and at some length talked about the proposed BMX track on the campus of South-Doyle Middle School. Bataille said the weather is hampering work on the track. He compared renovating there to “an onion,” saying that each layer of the project uncovers another layer.

He said the BMX track may be completed by August.

“It’s under design now,” he said, explaining that work on the project could begin at the end of February. He also talked about plans for the Knox-Blount Greenway, the I.C. King Park changes to develop an entrance along Maryville Pike and eventually closing down the Alcoa Highway entry to the park.

Rountree spoke about the three community schools in South Knox County and a “21st Century Library” at South-Doyle High School. She said the library is designed like a “college campus” library and includes a TV production studio, a café, unique seating and is part of the school’s Positive Behavior Support System.

She introduced Adam Frisk of Dogwood Elementary who talked of the community school concept and noted that those schools are open later for public use for religious and community organizations meetings. Community schools in South Knox include Dogwood, New Hope and South Knox Elementary.

Commissioner Daily spoke about the growing number of businesses opening in South Knox County, the efforts of the Governor John Sevier Corridor Committee, and clean-up projects.

“We’re the jewel of Knox County,” he said, noting that more and more attention is going to the south section.

“When you come across the (Henley) bridge, you don’t want to go back,” he joked.

Welch urged everyone to get involved in “Recode Knoxville” and called on the owner of the new “Landing House” restaurant who spoke briefly.

Questions ranged from what to do about the growing number of “Payday Loan” businesses, litter, plans for bicyclists and walkers, streetscapes, the BMX track, animal control, truck traffic, reports of gun fire, guard rails on East Redbud, diversity in housing, etc.

Welch replied to the gunfire report and said that two additional police officers have been stationed in the South Haven neighborhood.

Dailey is urging local residents to get involved with the South Knox Cleanup on Saturday, March 17 and urging everyone to go to www.keepknoxvillebeautiful.org and sign up. The clean-up effort begins at Sam Duff Memorial Park at 9 a.m. (Duff Park is located at 4060 Chapman Highway, which you can access via the driveway to the left of the Krystal Burger. There is also additional street parking on Hedgeapple Lane.) Volunteers are encouraged to wear long pants and comfortable, closed toed shoes. The use of litter-pickers, gloves, garbage bags, and safety vests will be available at no cost to the participants. Dailey is hoping for several hundred people to register and participate in the community event.