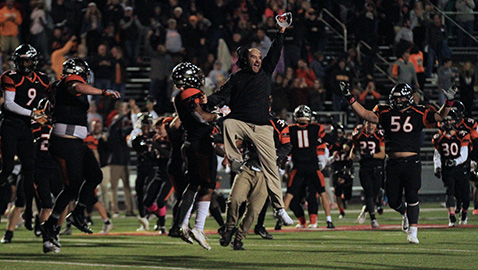 The play may long be remembered as The Stop in Powell High football lore.

Senior tackle Jackson Daniel smashed West running back Isaiah Mattress’ 2-point run attempt from the 1½ -yard line in overtime Friday night to give the Panthers a 21-20 victory in the battle of unbeatens.

“It was an open hole,” said the 330-pound Daniel, describing the collision on the game-deciding play. “Me and him looked at each other and it was inevitable it had to happen.

“He’s a great running back. He’s a strong guy, but I knew I was stronger and I knew I was going to make the play. I was confident in myself.”

West Coach Lamar Brown made the decision to go for two and took his extra-point kicking unit off the field after Powell committed an encroachment foul. The offside penalty moved the football half the distance to the goal from the 3-yard line.

“If we were out there still playing and had that same situation, I would do the exact same thing,” said Brown. “I believe in our offensive line. I believe in Isaiah Mattress. You’ve got to give Powell credit. They made a heck of a play.”

Powell, now 8-0 overall and 5-0 in Region 3-5A, can wrap up the regular season championship with a win over visiting Oak Ridge in this week’s Rivalry Thursday TV game. West (7-1, 3-1) will be looking to bounce back at Fulton.

“Our kids came out played with unbelievable heart and emotion and just did a tremendous job of laying everything they have on the line,” said Powell Coach Matt Lowe.

“That game turned out on who was going to make that one play. Either they were going to win on that play or we were.

“Jackson Daniel shot the gap, made the big hit and was able to pull him down. And that is one heck of a running back coming downhill. For him to make that play, that’s an unbelievable testament to Daniel.”

The clash between the Panthers and Rebels in the Jungle was physical and filled with penalties.

“A lot of times these games don’t live up to the billing, but this one sure did,” said Brown. “That was two really good football teams playing against each other.”

West drew first blood when Mattress, a 6-1, 196-pound junior, bolted off left tackle and raced 39 yards to score with 7:27 showing on the first quarter clock. Freshman Tyson Siebe drilled the extra point through the uprights after an illegal procedure foul.

Interceptions were exchanged later in the quarter. Freshman Gianna Magdos picked off West quarterback Baker Dance to give Powell the ball at its 34. Cooper Shymlock stopped the Panthers when he picked off quarterback Walker Trusley’s pass and the Rebels took over at their 40.

Cole Judy completed the aerial madness with his interception that gave Powell good field position at the West 39. The Panther offense couldn’t take advantage of it, but versatile Bailor Hughes backed up the Rebs with his punt inside the 1.

Powell cashed in on the field position on its next possession when Corrion McIntosh scored out of the “jumbo” package from the 1. Judy’s PAT kick tied the score at 7-7 with 9:09 remaining in the second quarter.

The Panthers took the lead before halftime when Trusley connected with freshman Adarius Redmond on a 34-yard 50-50 ball. Judy’s PAT made it 14-7.

A strip by Gage Foster and a recovery by Judy at the West 49 gave the Panthers another shot in the final minute of the half, but three Trusley passes fell incomplete.

Both teams had long drives in the third quarter but couldn’t score.

West’s defense stopped Trusley for no gain on fourth-and-one at the Rebels’ 37 at the start of the fourth quarter. Soon afterward, a 28-yard touchdown catch by Shannon Blair down the left sideline and Siebe’s PAT kick knotted the score at 14 with 10:19 left.

West drove the ball deep into Powell territory late in regulation but lost a fumble with 44 seconds remaining.

Powell went on offense first in overtime. Hughes ran for seven yards around right end on first down and Jordan Brown scored from out of the “jumbo” formation on the next play. Judy’s PAT made it 21-14.

West answered on first down in its OT possession, with Mattress galloping into the end zone on the right side from 10 yards out. But on the ensuing 2-point try, he ran into Daniel.