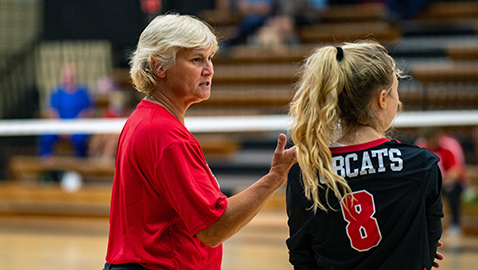 “Coaching is hard. Winning is harder. That’s why every year we recognize the coaches who have reached milestone win totals. You deserve to bask in a few moments of glory among your peers and collect a plaque to hang in your office.” – A message to coaches from the American Volleyball Coaches Association.

Susan Davidson recently received a letter of congratulations from the American Volleyball Coaches Association for her 400th win as a high school head coach.

“The plaque should be coming soon,” said Alice Rogers, Membership & Awards Specialist who oversees the AVCA’s Victory Club and confirmed information pertaining to Coach Davidson’s 400th win had been submitted in 2018.

Davidson was coaching at Farragut High at that time. She also coached the Lady Admirals in 2019 before resigning in February of 2020. Her won-loss record after 10 years at Farragut was 448-100.

“Our position for that job opened up Tuesday, I found out Coach Davidson was available Wednesday and we were at Litton’s for lunch on Thursday,” recalled Lambert.

All that remained were the formalities.

Lambert has known Davidson for quite awhile and knew about her credentials, which included five trips to the TSSAA state tournament and three state runner-up finishes in her decade at Farragut.

“Her 400-plus career wins put her in exclusive company,” said Lambert.

Davidson made a mark in her first season in Fountain City. Lambert said she guided Central to a regular season district title before losing at Carter in the district tournament and her team advanced to the region tourney for just the third time in school history before bowing to Anderson County, which moved on to the Class AA sectional and state.

The team’s record was 2-10, but the Lady Bobcats were competitive in several of their losses.

“She did a great job for us and also is a tremendous person,” said Lambert.  “The wins are a bonus.”

“As a coach, she’s one that can make a difference when talent and everything else is equal. She’s also one that makes a difference in a student’s life.”

Coach Davidson said she is grateful to have the opportunity to work with student-athletes.

“Being honored by AVAC is a special recognition,” she added. “Having the opportunity to coach volleyball and work with athletes is a great blessing I don’t take lightly.  Building lasting relationships with my players is the greatest reward.”