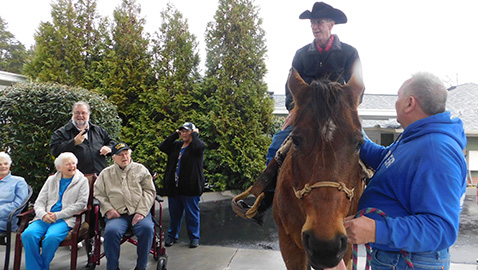 A resident at The Courtyards Senior Living of Knoxville recently had his Christmas wish come through.

A steady rain didn’t mar the day for Gene Davis on the morning of Thursday, Dec. 20 as he received his Christmas Gift Wish from the Northwest Knoxville retirement home.

Davis, 85, once owned a farm where he raised and broke horses. This was his profession and became his passion when he first rode a horse more than eight decades ago.

Davis still walks without assistance and still looks like he could do a little farming today. He has a great knowledge of farm and country life.

He’s been a resident at Courtyards for the last year but still has a desire to connect with this aspect of his life.

The Courtyards Knoxville was able to grant Davis his wish of riding a horse one more time while other residents of the retirement home were on hand to witness what Davis called his best Christmas ever.

“It’s been a long time since I’ve seen or ridden a horse,” Davis said. “I first rode a horse when I was three years old and now, I’m about 85.”

The Courtyards set up the ride with the help of Tennessee Walking Horse Breeders Exhibitors Association and longtime friend Charlie “Junior” Beeler, who was formerly a horse farrier.

Beeler supplied horses for a ride.

The TWHBEA was represented at the event by Chris Helton, who presented Davis with a hat and an honorary TWHBEA membership.

Davis was noticeably emotional as he took his short ride around the property as part of the biggest surprise of his life.

“Buddy, it’s something else,” Davis told the residents after he mounted the horse and donned a cowboy hat.

After his ride, Davis lit a cigarette as he strived to calm his nerves. He was obviously thrilled despite being overwhelmed and a bit nervous.

“I’m going to have to smoke a little bit to calm my nerves,” Davis said. “This was a big surprise and this is the best Christmas I’ve ever known.”