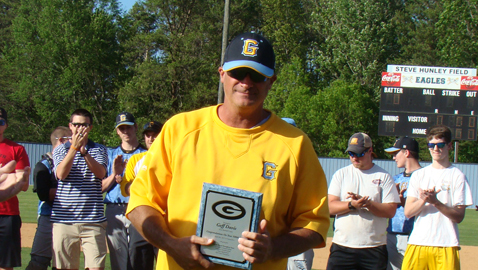 Geff Davis has built one of Knox County’s top baseball programs at Gibbs High school and on Tuesday night the school honored its longtime coach for reaching a career milestone.

Davis, who won his 500th game on April 4 when the Eagles defeated District 3-AAA rival Central 8-1 at Tommy Shumpert Park, was given a plaque by Gibbs principal Jason Webster and athletic director Jeff Thomas before Gibbs closed out its regular season against Maryville at Steve Hunley Field.

Davis, who began his coaching career at Karns High School, returned to his alma mater in 1998. Under his direction, the Eagles have won 10 district championships and claimed five region titles. Davis also guided Gibbs to five state tournaments. On the grand stage, the Eagles finished second twice and had a third-place finish.

Gibbs also won the 2010 Class AA State Championship with Davis at the helm.

In addition to his success on the field, Davis oversaw a recent massive renovation of the baseball facility. Steve Hunley Field is now one of the top baseball venues in the Volunteer State.

Davis, a two-sport athlete during his playing days in Corryton, was drafted by the Montreal Expos. He stayed in the game after his time in professional baseball ended.

He’s been the head coach in Corryton for two decades, yet he gives the credit for his success to the players he’s coached throughout his illustrious career.

“If I didn’t have the players I have I might still be working on 100 [wins] right now,” said Davis, who was once the school’s boys basketball coach and also serves as an assistant to Gibbs football coach Brad Conley. “We’ve had some great players come through here.

“I say that to get 500 wins, you have to have 500 good players. And that’s probably as many good players that I’ve had over the years.”

Gibbs lost its regular-season finale to the Rebels Tuesday night but the Eagles have won 21 games this season and shared the District 3-AAA regular-season championship with Karns.