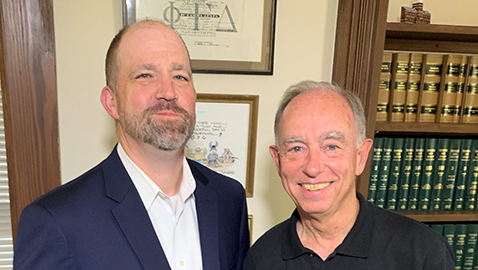 “We’re going to follow the law, we’re the gatekeepers of democracy,” said Chris Davis on Tuesday after he was selected to replace Cliff Rodgers as the executive director of Knox County Elections. Rodgers will retire effective May 30th.

The commission, meeting together in the small assembly room of the City-County Building, unanimously voted to hire Davis. He’s been working as deputy director to Rodgers for 12 years and received his boss’s hearty endorsement.

“He can do everything I can do and some things I cannot,” Rodgers told the board. The sometimes outspoken executive director told the board to “replace me with Chris,” adding, “I ain’t about to change my mind.”

The brief meeting was streamed on the Knox County website.

Prior to coming to the election commission office Davis was a communications director for the UT Solar Institute. He also has worked in public relations for the Red Cross Knoxville Area Chapter.

Davis said that as a child his favorite subject was government and civics. In 2012, his department at the University of Tennessee was dissolved and he was out of work. He said he volunteered as a poll worker and, when assigned to a precinct that was not his local voting place, he missed voting in the only time of his life.

“When the prior assistant administrator resigned I applied. I talked with Mr. Rodgers. Eleven people had applied and we just clicked,” Davis told the commission.

In answering a few questions from the commission members, Davis said he will oversee the new election machines that will count the paper ballots in August. He said the machines will arrive in Knoxville the day after the meeting and the old paperless machines have been shipped out.

“We are going to ramp it up a lot and see a huge amount of absentee ballots,” Davis said, adding that requests are already coming into the office.

He also said he’s looking for an assistant who can “hit the ground running and (has) a good knowledge of what we do.”

Davis said the election office will provide lots of information on the new voting system and do a “great deal to educate the public in June and July.”

“Our job is to minimize the hiccups,” Davis said of the new paper ballot system.

He thanked Rodgers for “your faith in me” and said he may be calling him after May, adding, “I’ve got your number.”

Rodgers told the commission that a June meeting would be needed to prepare for the August 6 election day. The meeting date was set for June 18 at 8:30 a.m.