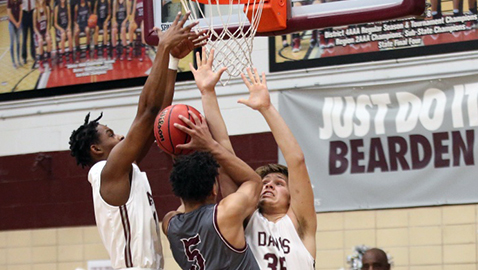 Bearden High’s boys basketball team had a 10-1 record when it found out athletics would be shut down by the Knox County School system the week before winter break.

The layoff, which included games and practice, prevented the Bulldogs from making a trip to Middle Tennessee during the holidays (Dec. 17-19) and playing three games in the Riverdale Christmas Classic.

One of the teams Bearden missed out on playing was Siegel, which BHS Coach Jeremy Parrott said was one of the top teams in the state. Bearden also would have played Murfreesboro Riverdale and Lebanon in the holiday tourney.

Bearden also didn’t get to play a home game against Lenoir City Dec. 15. It was able to move up a Dec. 22 game against Alcoa to Dec. 12 – two days before the shutdown.

“It could potentially be very hurtful to our team’s momentum,” said Parrott. “We have not played perfect basketball up until this point, but a 10-1 start isn’t bad either.

“I just told our guys we cannot control what others do, but we can control how we respond to the decision to shut down our team. We just have to make due as individuals and attempt to stay in shape, study film, and get to a goal or gym whenever we can as individuals.”

Losing revenue from having home games cancelled also can affect a program’s budget.

“We have our yearly bills beginning to come due, and we are down several home gates due to crowd limitation (due to pandemic guidelines) and now closures,” said Parrott. “We will need help for sure, and I am not sure where that help is coming from.”

Parrott said his No. 1 concern from his team not getting to play or practice Dec. 13 through Jan. 4 was his players’ “well-being.”

Parrott, who guided Bearden to the school’s first Class AAA state championship in 2019, also said the team missed out on getting film on his players against good competition to send to colleges.

The experience of traveling and playing on the road in a new environment – which helps prepare a team for a possible state tournament experience – also was lost.

Finding a hoop to shoot at, Parrott added, ranked down the list of his concerns.

“We never stopped getting ready for the season,” he said. “We spent all summer, following both TSSAA allowances and Knox County guidelines, getting ready for now. In other words, anytime we were allowed in the gym, the kids were there. All of them worked to get better. It was a commitment to our tradition at Bearden.

“Since we weren’t allowed to scrimmage in preparation for the year, we have played as much as possible in the early going,” added Parrott. “We felt this was critical to being ready no matter what happened. Play as much as possible when we could, with the thought that we’d be ready whenever the post-season started.”

On the floor this season, the Bulldogs have been very stingy.

“Defensive focus has been a hallmark of this team,” said Parrott. “We are really going to guard you.”

Statistically, Bearden has one of the top defenses in the state, regardless of classification.

The Bulldogs are allowing only 42.7 points per game after 11 contests.

The Bulldogs’ only loss came in a 60-48 decision against Knoxville Catholic on Dec.10.

Team captain and senior wing AJ Pruitt leads Bearden with a 13-point average. He also is averaging 5.3 rebounds, 3.6 assists and 2.4 steals per game.

“He stuffs the stat sheet every night,” said Parrott.

Senior guard Izaiha Bredwood averages 10 points and 4.5 assists to one turnover a night.

The Bulldogs also are getting 10.1 points and three assists per game from junior guard Elijah Bredwood. Senior guard Demias Munsey averages eight points and two steals per game as a “defensive stopper and playmaker,” said Parrott.