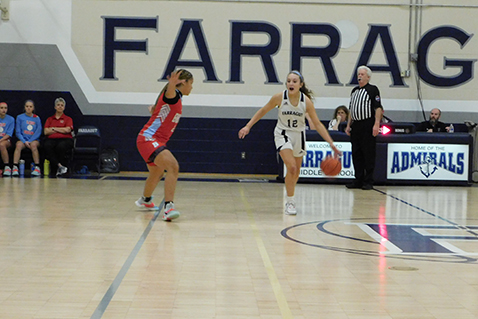 The Farragut Lady Admirals turned up the defensive pressure and never relented as they eliminated No. 8 Bearden 46-13 Wednesday night at FMS’s Bobby J. Henry Gymnasium.

Farragut allowed just nine points to the Lady Bruins, who advanced to the second round of the tournament with a win over ninth-seeded Gresham on Saturday, Jan. 14 over the first 12 minutes of the contest. The Lady Admirals were even stingier after halftime as Bearden only managed to score four points over the third and fourth quarters.

Farragut also controlled the boards as it won the rebounding battle handily and that’s just what coach Devan McIntyre wanted to see.

“We’re challenging them to be more consistent and I want the team to play defense and rebound,” McIntyre said. “The one thing we stat is rebounding and I want them to rebound.”

The Lady Admirals were in control of the game from the outset as they wasted little time setting the tone for the contest. They opened an 11-4 lead in the first quarter and saw their advantage balloon to 20-9 by halftime.

Still, McIntyre wasn’t all that happy at the break.

“Our halftime chat was interesting,” McIntyre said. “We challenged them.”

The challenge came after the Lady Admirals’ guards struggled to make shots. Farragut, however, was dominant inside as post player Trinity Curry was nearly unstoppable inside. She scored nine of her game-high 21 points over the first 12 minutes and finished the game with 11 rebounds.

Another post player, Makenna Hartley had five points in the first half. She would finish with seven points.

The Lady Admirals also got a second-half boost from guard Gabby VanAcker, who scored seven of her nine points after halftime. VanAcker is one of the league’s top guards according to her coach.

“She’s more than capable of being the best player on the floor,” McIntyre said of VanAcker, who scored seven points and knocked down a 3-point shot in the third stanza.

Semifinals were slated for Saturday at South-Doyle Middle School. Results were not available at press time. The championship and consolation games are Wednesday at South-Doyle. The top three teams will advance to the state sectionals.

In Saturday’s semifinals: Holston, the top seed played Cedar Bluff and Gibbs played Carter at South-Doyle. Results were not available at press time.

The winners will play today at 6:15 p.m. in the title game at South-Doyle. Both finalists will advance to the sectional round of the state playoffs.