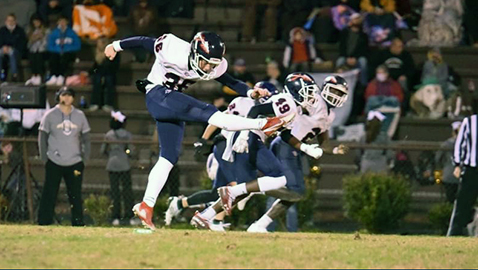 Player of the Year Kalib Fortner heads it up from his outside linebacker position.

Farragut Coach Eddie Courtney said he did not see all of the Knox County teams in action this season, but “I did see the Fortner kid of Central on TV twice and he’s a good hard nose football player.”

Farragut’s Eli Purcell, the Region 1-6A Defensive Player of the Year, and South-Doyle’s Noah Myers are the other two linebackers on the first unit.

Purcell had 104 total tackles, including 57 solo stops, 34 assists and 13 for minus yardage.

Harrison recorded 77 stops from his tackle position, including 17 TFL and six sacks. He also had two fumble recoveries, four QB hurries and one interception.

Fulton Coach Rob Black said Vaughn “was a dominant force on defense and also was very good on offense. He was voted Defensive Lineman of the Year in our region.”

The defensive ends are senior Xander Allen of Halls and South-Doyle junior Levi Herald, who had 97 tackles, 16.5 TFL and a dozen sacks.

Roaming the All-Knox County secondary are seniors Preston Sisler of South-Doyle and Conner Williamson of Central along with Powell junior Carson Whitehead.

Sisler was a two-way standout for the Cherokees, also shining as a wide receiver.

Defensively, Sisler had six interceptions, including one he returned 70 yards for a touchdown, and five pass breakups. The Region 2-5A Defensive Back of the Year also had 60 tackles and four sacks.

On offense, Preston had 810 receiving yards and three TD catches, including a 95-yarder.

Williamson, a cornerback, was targeted on 40 pass attempts of 10 or more yards during the season, and out of those, only five were completed and none for TDs. He finished with four interceptions (one TD return), 15 PBUs, 30 solo stops, seven assists and one blocked punt.

Whitehead returned two of his five interceptions to paydirt. He also had 72 tackles (50 solo) and seven PBUs.

The All-Knox County kicking game is in good hands with South-Doyle senior Ewan Johnson the placekicker and Central junior Ryan Bolton the punter. Both were weapons for their respective teams during the season.

Johnson made 48 of 50 PAT attempts and 10 of 17 field goal tries to total 78 points. His longest FG this season was a 49-yarder. The Region 2-5A Kicker of the Year also excelled in kickoffs, with 69 of 74 being touchbacks and forcing the opposition to start from its 20-yard line.

Bolton’s punting also was effective, thanks to his consistent hang time and placement. He averaged 37 yards per punt and pinned eight inside the 20. Only three of his 32 punts were returnable, with the rest either fair caught or downed.